More than bragging rights: No. 6 Michigan, No. 8 Michigan St 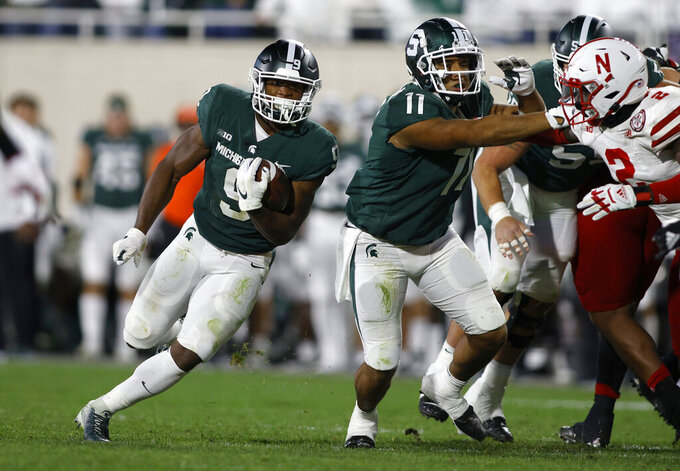 Mel Tucker became familiar with the Michigan State-Michigan rivalry during his two seasons as a graduate assistant with the Spartans on Nick Saban's staff two-plus decades ago.

Now in his second season as Michigan State's coach, he knows much more about the emotionally charged series with the Wolverines.

“Since the day I’ve been here — February 12, 2020 — there hasn’t been a day has gone that someone hasn’t mentioned to me something about this game,” Tucker said. “People talk about it daily."

The in-state rivalry has been the talk of college football this week. It has generated so much interest that Fox’s “Big Noon Kickoff” and ESPN's “College GameDay” will be on the same campus to break down the game.

The winner remains at least tied with No. 5 Ohio State atop the Big Ten's East Division and in position to play for conference and national championships.

With so many people in Tucker's ear about the rivalry, he doesn't pretend privately or publicly that it's just another game.

“I told the players when you have rivalry games like this, ultimately your legacy and your reputation, a lot of it is formed by how you play and coach in these games," Tucker said. “That’s the reality of the situation. And, that’s a good thing because not everyone has these opportunities to coach and play in these games.”

Michigan is averaging 253.3 yards rushing, ranking No. 1 in the Big Ten and No. 5 in FBS, with game plans that feature the shifty Blake Corum and powerful Hassan Haskins.

“They’re both really strong and they train themselves to be that way," Harbaugh said. “They both have the natural, God-given ability, the things that running backs crawl out of the crib having. Athletic ability, balance, innate ability to just see the hole and balance and contort their bodies."

Michigan State has its own running back with plenty of skill in Wake Forest transfer Kenneth Walker. The powerful and speedy Walker ranks second in the country with 997 yards rushing and nine touchdowns on the ground.

“That’s a guy that can make big plays, and can make you pay if you’re not in the right spots on defense,” Michigan linebacker Josh Ross said.

The quarterback who can effectively throw the ball down the field will improve his team's chance to win because both defenses will stack the box in an attempt to stop the run.

Michigan's Cade McNamara is averaging just 7.64 yards per attempt, ranking No. 61 in FBS. Coastal Carolina is the only ranked team that has thrown fewer passes than the Wolverines this season.

Michigan State's Payton Thorne has connected with receivers Jayden Reed and Jalen Nailor for long touchdowns through the air. He ranks among the top 25 in FBS in passing efficiency, passing touchdowns (15) and yards passing.

Michigan State linebacker and special teams player Ben VanSumeren will face his former teammates. They include Michigan defensive end Aidan Hutchinson, who said it was “a little weird" when VanSummeren left to join the in-state rivals..

“I don't talk to him a whole lot anymore," Hutchinson said. “Hopefully we can get the win so he can feel bad that he transferred."