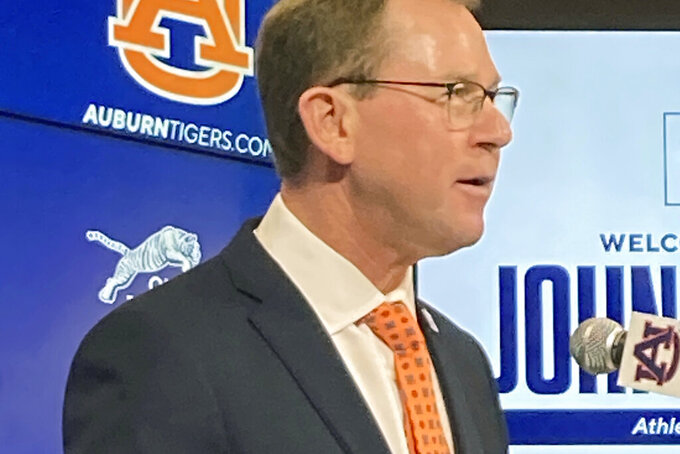 AUBURN, Ala. (AP) — John Cohen carries around a sheet of paper with a list 58 items long mostly comprised of qualities he wants in an Auburn football coach and things to ask them.

There's no question regarding the No. 1 priority for Auburn's new athletic director: Finding a new football coach to replace Bryan Harsin, ousted hours before Cohen's own hiring was announced. And finding someone who fits better than Harsin, an outside-the-box hire from Boise State who won only nine of his 21 games and didn't survive to the end of his second season.

“It obviously dominates my time, which it should,” Cohen said Tuesday at his introductory news conference. "The football head coaching position at Auburn University is a critical decision and we take it with the utmost seriousness.

"There will not be anything we don’t look at. Everything is on the table every day. I’m not going into dates and times and the process and when the finish line is going to be. We’ll get there when we get there and we’re going to make the right decision for this great institution.”

Some of the potential candidates for the job include No. 11 Mississippi's Lane Kiffin, No. 19 Liberty's Hugh Freeze and Jackson State's Deion Sanders.

Interim coach Carnell Williams, set to lead the Tigers for the second time Saturday night against Texas A&M, was in attendance. The popular former Auburn player said Monday he had only briefly met Cohen and demurred when asked if he wanted to be considered a candidate.

“I can’t think beyond this moment,” Williams said Monday. "I want to sit in this moment and live in this moment because I never could’ve dreamed of anything like this. I can’t answer that question. This isn’t about me.”

Auburn has lost five straight games and recruiting struggles under Harsin could make for an uphill battle in the Southeastern Conference, which has five teams currently ranked among the top 11.

Cohen was in his seventh year as Mississippi State's athletic director. He hired Joe Moorhead, who was fired after going 14-12 in two seasons, and current coach Mike Leach.

“It’s about fit. And there’s not an exact science,” Cohen said. “There’s analytics. There’s a little bit of gut feel. There’s a lot of factors. I could read you off this list, a lot of this is commonsensical, a lot of this is really important to me as I’ve been through the hiring process several times.”

Cohen said he will make the final hiring decision but won't turn down input from others. Auburn will use a search firm to help with logistics and background checks, but not to provide names of potential candidates.

“The 35-year old version of myself would have stuck my chest out and said ‘This is how it’s going to be,’” he said. “The 56-year old version of John Cohen says, ‘I want all the information that is available to me from anyone I can possibly get it from at Auburn and beyond.’ ”