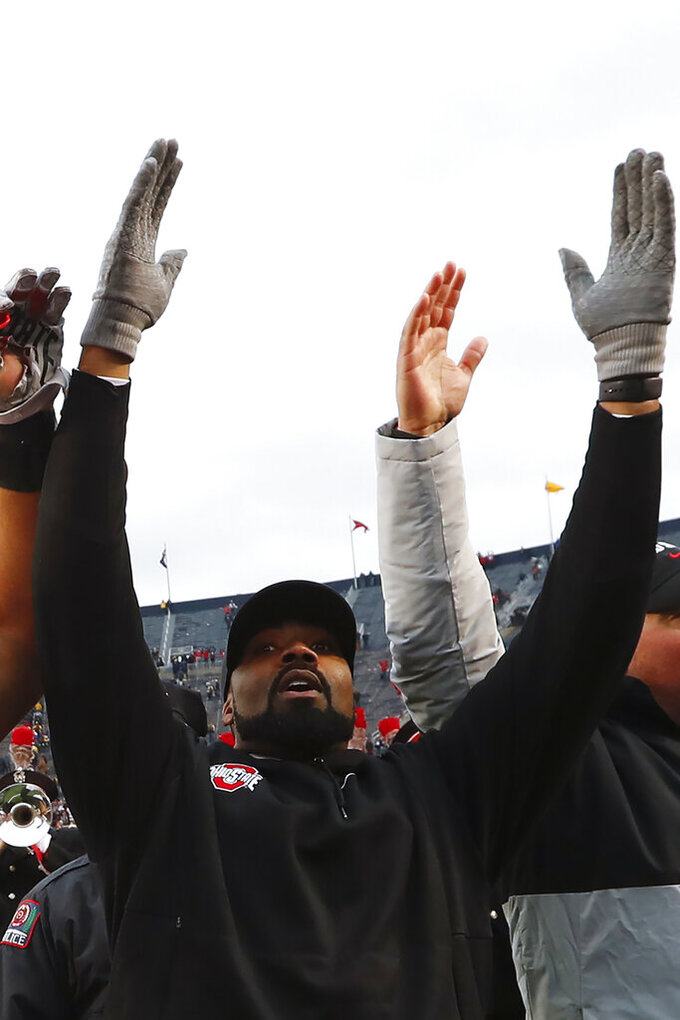 FILE - Then-Ohio State's linebackers coach Al Washington celebrates a win against Michigan after an NCAA college football game in Ann Arbor, Mich., Saturday, Nov. 30, 2019. First-year Notre Dame football coach Marcus Freeman knows success in the 2022 season will depend on how strong the Fighting Irish will be on the offensive and defensive lines. Al Washington is in charge of the defensive line. (AP Photo/Paul Sancya, FIle)

“I kind of told them in the team meeting, I have a vision and identity I want for our team,” Freeman recalled. “And that’s to be a team that can run the ball and stop the run. I believe in our O-line and D-line being the foundation of our team.”

To accomplish that, the 36-year-old Freeman has turned to a couple of familiar faces to get the offensive and defensive lines ready for the season opener Sept. 3 at Ohio State, Freeman’s alma mater.

Back as the offensive line coach, a position he held under Freeman’s predecessor, is 63-year-old Harry Hiestand. Freeman then hired former Ohio State defensive line coach Al Washington to replace Mike Elston, who left for Michigan, his alma mater.

“I’m really, really pleased with both sides,” Freeman said. “They’ve been physical, tough. They’re making each other better. I don’t even think it’s technique or scheme as much as the mentality that I can whoop the man across from me. And I think both of those guys (Hiestand and Washington) brought that in here.”

Hiestand was an easy hire for Freeman and offensive coordinator Tommy Rees. In his first stint with the Irish under Brian Kelly from 2012-17, Hiestand tutored future NFL first-round draft choices Zack Martin (Dallas 2014), Ronnie Stanley (Baltimore 2016), Quenton Nelson (Indianapolis 2018) and Mike McGlinchey (San Francisco 2018). As the team’s quarterback in 2012 and 2013, Rees was protected by Hiestand’s heroes.

During 2017, his final season with Notre Dame before re-joining the Chicago Bears as offensive line coach for a second time, Hiestand’s charges, led by All-Americans Nelson and McGlinchey, won the Joe Moore Award as the nation’s top line after producing 269.3 rushing yards a game.

Martin and Nelson have been among the visitors who have returned this spring to help Hiestand put his current charges through their paces.

“They want to be a part of what coach Hiestand is trying to instill in us,” said 6-foot-6, 305-pound right guard Josh Lugg, who has returned for a sixth season and moves over from right tackle, opening it for Blake Fisher.

“The message of what (the former players) learned when they were here and the importance of the details in how we block is tremendously important to our success,” Hiestand said. “Their visits are so valuable.”

The 37-year-old Washington spent the last three seasons as Ohio State’s defensive line coach but worked under Freeman when both were at Cincinnati in 2017.

“We have a lot of experience in the (defensive line) room,” Washington said. “The thing I appreciate is how well they recognize there is another level and that’s what we’re in the hunt to accomplish.”

Isaiah Foskey, a 6-foot-5, 260-pound end, turned down an NFL opportunity to return for his senior season after leading the Fighting Irish with 11 quarterback sacks, 12.5 tackles for loss and six forced fumbles in 2021.

“My main focus is just to be an all-around defensive player,” Foskey said. “Everyone knows I can pass rush. I want to be able to stop the run. I like (Washington’s) coaching style. He focuses on pass rushing and run stopping. That’s why I came back.”

Foskey is one of eight linemen with extensive playing time from last season. Washington has been particularly impressed with the work inside and outside by junior linemen Rylie Mills and senior tackles Jacob Lacey and Howard Cross III. Sophomore tackle Gabriel Rubio has impressed with his size (6-foot-5¼, 290 pounds) and nastiness.

“There’s a group of older guys that have taken the bull by the horns and become leaders,” Washington said. “We have to keep building. Greatness is found in the details. That’s our mentality.”