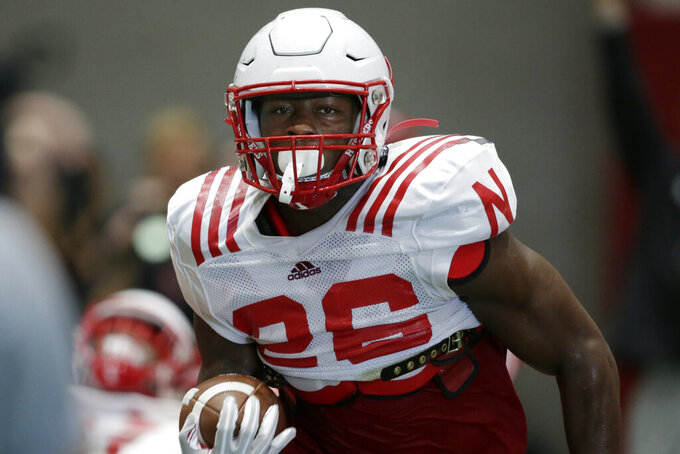 In this Aug. 14, 2019 photo, Nebraska running back Dedrick Mills (26) carries the ball during a drill a NCAA college football practice in Lincoln, Neb. Mills is looking to make the most of his second opportunity in major college football. He was kicked out of Georgia Tech after failing three drug tests. He spent two years at a junior college in Kansas and now is set to be the starting running back when Nebraska opens against South Alabama. (AP Photo/Nati Harnik)

"Just my decision making," he said, shaking his head.

Three failed drug tests got him kicked out of school, and suddenly he found himself at a junior college in Kansas wondering if he would ever make it back to the mainstream of major college football. He wanted to quit and go home just four months after he arrived at Garden City Community College, but his family back in Waycross, Georgia, wouldn't let him.

Three years removed from the season he led Georgia Tech in rushing, Mills likely will be No. 24 Nebraska's starting running back against South Alabama on Saturday.

"I think he's surprised me on how quickly he's caught on and his talent," coach Scott Frost said. "He's been a real pleasant surprise in camp, and I see good things coming from him. He runs really hard and plays hard and comes to practice every day and works.

"He probably has better breakaway speed than I expected, and he's hard to bring down. He's going to be a big addition to our offense, and I expect him to be on the field during our first play."

The 5-foot-11, 220-pound Mills is out of the mold of the Huskers' 1,000-yard rusher last season, Devine Ozigbo. He has a no-nonsense running style. He can juke, but he'd rather run over defenders.

Mills was suspended twice and appeared in only nine games for Georgia Tech in 2016. He totaled 771 yards, going for 132 against North Carolina before he earned Most Valuable Player in the TaxSlayer Bowl for piling up a career-high 169 on 31 carries against Kentucky.

He converted on eight of his 10 third-down carries when Tech needed 1 to 3 yards for a first down. He scored a team-leading 12 touchdowns and last year, after sitting out most of 2017 at Garden City because of injury, led the Broncbusters with 19 rushing TDs.

"Goal line, 20 yards in, that's my thing," he said. "That's when you put me in the game for real. I'm getting in the end zone. No doubt about it. You need that fourth-and-1, third-and-1, I'm getting it. I ain't letting nobody stop me. Not just one man. You have to come gang tackle me if you're going to tackle me behind the line."

As good as Mills was as a freshman, Georgia Tech sent him packing following a third failed test for marijuana. Then it was off to Garden City, where he missed most of his first season with a broken collarbone. The culture shock of moving from Georgia to sparsely populated western Kansas was almost too much for him to bear.

"It most definitely tests your desire to keep playing," he said.

Mills' routine was to go to class, play ball and hang out with other athletes. He said the most fun he had was going on a team outing to the freakishly large municipal swimming pool, known locally as the "Big Pool" because it's bigger than a football field.

He said he needed every bit of the encouragement offered by his mom, Sharon Mills, and uncle, Fred Williams. He made it through two years and pledged to Nebraska.

"I was so ready to get out of there," Dedrick said. "I was so happy when I did. I'm so excited to be here right now. I wake up every day with a smile on my face."

Mills said he's not subject to more stringent drug testing at Nebraska because of his history at Georgia Tech.

Mills' confidence won't be an issue. His goal is to rush for at least 1,500 yards.

"God gave me an opportunity to come here and show my talent," he said. "I could have been anywhere in the world doing anything else, but for him to give me this second chance to come back out here and play football again, I'm taking full advantage of it and doing what I'm supposed to do with it."