No. 10 Indiana puts unbeaten mark to test at Michigan State 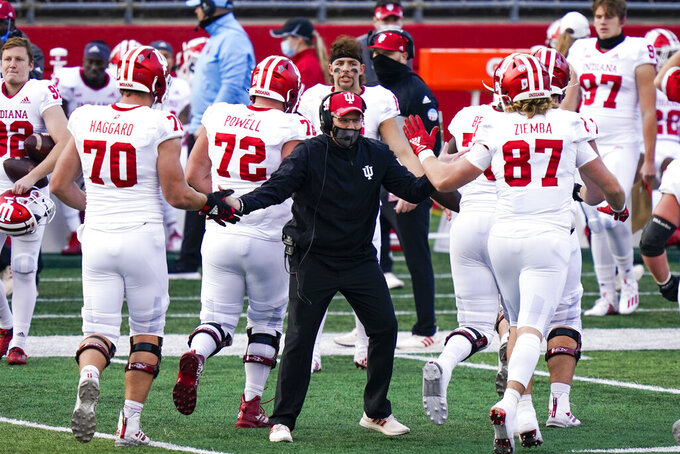 It is probably a good sign for No. 10 Indiana that its quarterback is using cliches about avoiding a letdown.

“We have been having a great season so far, but the season is not over,” Michael Penix Jr. said. “We still have games that we are looking forward to like Michigan State this weekend. This is a great program, so we have to come with a positive mindset and keep that 1-0 mindset that we have had.”

The Hoosiers haven't often been in this position, unbeaten through three Big Ten games and tied for first in their division. They're ranked in the top 10 for the first time since 1969, and they’re trying for their first 4-0 start in conference play since 1987. They’re also coming off their first win over Michigan since ’87.

Now they will try to buck another trend Saturday. Michigan State has dominated its series with Indiana lately. The Spartans have won 10 of the last 11 meetings in the battle for the Old Brass Spittoon, but Indiana (3-0, 3-0) is certainly favored in this one.

“Indiana's a good football team. I like the way this team is built," Michigan State coach Mel Tucker said. "They are a physical football team, they've got a difference maker at quarterback.”

The Spartans (1-2, 1-2) are having their ups and downs in Tucker's first year at the helm. They lost their opener to a Rutgers team that entered the day on a 21-game Big Ten losing streak. Then Michigan State rebounded with a huge road win over rival Michigan. Last weekend, the Spartans took a step back, losing 49-7 at Iowa.

Michigan State beat Indiana last season 40-31. Matt Coghlin made a tiebreaking field goal with 5 seconds left, and then the Spartans scored a touchdown on a fumble on the Hoosiers’ final offensive play.

The Spartans had seven turnovers in their loss to Rutgers, and Rocky Lombardi threw three interceptions against Iowa. Michigan State seems capable of moving the ball when not turning it over. Lombardi is tied for third in the conference in yards passing per game.

Indiana, on the other hand, has a plus-six turnover margin.

Indiana is 16 of 16 in the red zone with 12 touchdowns, and it has held opponents to just five TDs in nine red zone opportunities.

Jalen Nailor and Ricky White are each averaging over 20 yards per reception for Michigan State, and Jayden Reed has a team-high 13 catches. All three of those receivers have had a catch of at least 50 yards this year.

Indiana lost offensive coordinator Kalen DeBoer when he became Fresno State's coach. Nick Sheridan is in that role for the Hoosiers now, and the the team is averaging 37 points a game, the third-best mark in the Big Ten.

“We want to make sure our last play of the season is our best play, so we are constantly trying to improve and get better. That is no different this week,” Sheridan said. “I thought we had a good week of prep, a lot of the plays that were made Saturday we made them in practice. We are going to need that. This conference is unforgiving and you have to be ready to bring it every single week as a staff and as a player.”