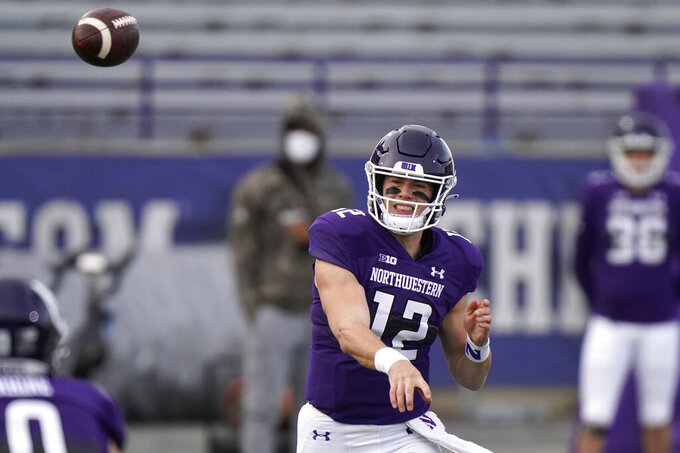 The unbeaten Wildcats are closing in on a berth in the Big Ten title game. Wisconsin, the second-place team in the Big Ten West, may not be able to play enough games to be eligible — and a win by Northwestern this weekend would eliminate everyone else. Michigan State is back after its game against Maryland last weekend was canceled.

Michigan State's receivers vs. Northwestern's secondary. Jayden Reed, Jalen Nailor and Ricky White are all averaging at least 50 yards receiving a game, but now they go up against a Northwestern team that ranks second in the league in interceptions (11) and has allowed the second-fewest yards per game (214) through the air.

Northwestern: QB Peyton Ramsey has thrown 50 career touchdown passes, the second-most among active Big Ten quarterbacks. Ramsey is in his first season with the Wildcats after transferring from Indiana.

Rocky Lombardi has been Michigan State's starting quarterback this year, but he was benched in favor Payton Thorne during the Spartans' most recent game, a 24-0 loss to Indiana on Nov. 14. ... Northwestern is 5-0 in Big Ten play for the first time since 1996, and this is its highest AP ranking since '96. ... Michigan State coach Mel Tucker is 3-3 against AP Top 25 opponents — 2-2 at Colorado and 1-1 this year with the Spartans. ... Northwestern has won six straight dating to last season, the longest active winning streak in the conference. ... The Wildcats have held opponents scoreless in the second half in four of their five games.