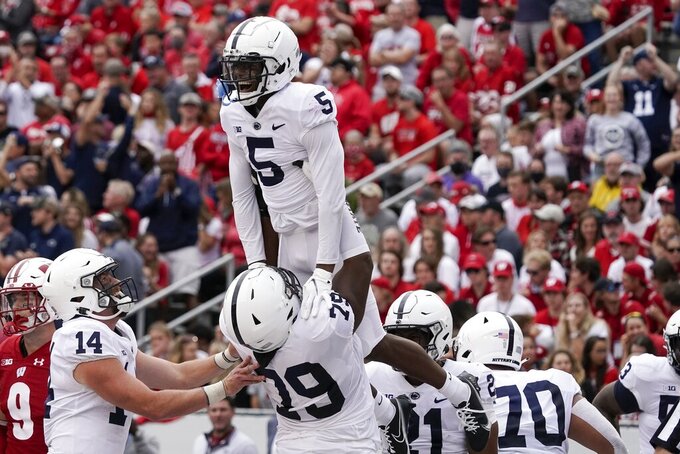 Line: Penn State by 22 1/2, according to FanDuel Sportsbook.

Penn State has won five in a row dating to last season and looks to improve to 28-3 all-time against Mid-American Conference teams. Meanwhile, the Cardinals are the reigning MAC champions and have won eight straight. They’ll try for their third win over a top-25 opponent in as many seasons.

Ball State’s running game vs. Penn State’s front seven. The Nittany Lions held Wisconsin to 3.1 yards per rush last week and forced the Badgers to try and beat them down the field. It didn’t work out for Wisconsin as the Nittany Lion secondary intercepted two passes and broke up a few more. The Cardinals ran for 216 yards in Week 1 and will find success if they can soften Penn State’s front early.

Ball State WR Justin Hall: The fifth-year senior leads all active FBS players with 265 career receptions and opened the season with an eight-catch, 137-yard effort in a win against Western Illinois. If any Cardinal can test Penn State’s talented secondary, it’s Hall.

Penn State RB Noah Cain: After missing all but one play with an injury last season, Cain had a quiet opening week with just eight carries. He still managed to average six yards per attempt and scored the go-ahead touchdown in the fourth quarter though. Cain is a sturdy, patient runner who could make Ball State’s afternoon miserable if coaches decide to feed him carries.

The Nittany Lions are 119-13-1 all-time in home openers. … Penn State WR Jahan Dotson has 100-plus yards receiving in each of the last three games. … QB Sean Clifford needs 21 passing yards for 5,000 in his career. … The Nittany Lions played a MAC team 18-straight years before 2020. … Ball State is 5-25 all-time against top-25 teams but won their last two. … The Cardinals beat then-No. 23 Buffalo in the MAC championship game and then-No. 19 San Jose State in the Arizona Bowl last season. … Hall has at least one catch in every game he’s played in (44) and is 182 yards away from Dante Ridgeway’s program record of 3,030 career yards receiving. … The Cardinals have 16 fifth-year seniors.