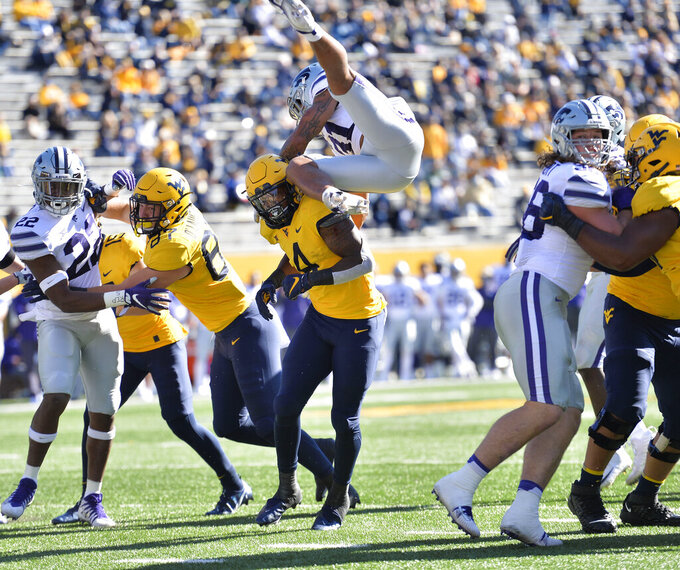 Some things to watch in the Big 12 on the first Saturday of December, which was originally supposed to be the day of the conference championship game. There is instead a full slate of games, with three teams playing their regular season-ending 10th games.

West Virginia at No. 12 Iowa State. The Cyclones (7-2, 7-1 Big 12) play their final regular-season conference game, and are guaranteed a spot in the Big 12 title game with a win. They are also in the Dec. 19 game if No. 13 Oklahoma, No. 19 Oklahoma State or Kansas State lose. It would be the first-ever appearance in any conference championship game for Iowa State. West Virginia is coming off an unexpected open date after its game against the Sooners was postponed because of COVID-19 issues in the Oklahoma program. The Mountaineers (5-3, 4-3), also with a game left against Oklahoma, aren't mathematically eliminated from the Big 12 title game, but has to win both of their remaining games and get a lot of help.

No 19 Oklahoma State at TCU. The Cowboys (6-2, 5-2) still have a chance to make it to the Big 12 title game by winning their last two games and getting some help. The Horned Frogs (4-4, 4-4) look to finish with a winning conference record after starting 1-3. Oklahoma State won by a touchdown last season over TCU, which won by the same margin when the two teams last met in Fort Worth two years ago.

Just fewer than half of all Big 12 games (18 of 37) have been decided by a touchdown or less. ... Kansas State's seven sacks last weekend at Baylor where their most in a game since 2003, when the Wildcats had eight against the Bears. The Wildcats are playing their regular-season finale. ... Texas Tech has to score 25 points in its regular-season finale against Kansas to average at least 30 points a game for the 20th season in a row, the longest active streak in the Big 12.

No. 13 Oklahoma, which has a Big 12-best five-game winning streak, and Baylor play for the third time in less than 13 months. The Sooners, more than a three-touchdown favorite, needed overtime to win the Big 12 title game last December, three weeks after their comeback from a 25-point deficit to win 34-31 in their regular-season matchup. Oklahoma had a 27-3 series lead.

Texas senior QB Sam Ehlinger surpassed 11,000 career yards passing last week, and has thrown for 651 yards with six touchdowns and no interceptions in his last three games. Ehlinger is the Big 12 leader with 315 total yards per game and his 23 passing TDs. He is also the Longhorns' leading rusher with 388 yards and eight more TDs. His 124 career total TDs are fifth in Big 12 history, eight behind Colt McCoy's school record.