No. 15 Tennessee hosts Akron to fix issues before SEC slate 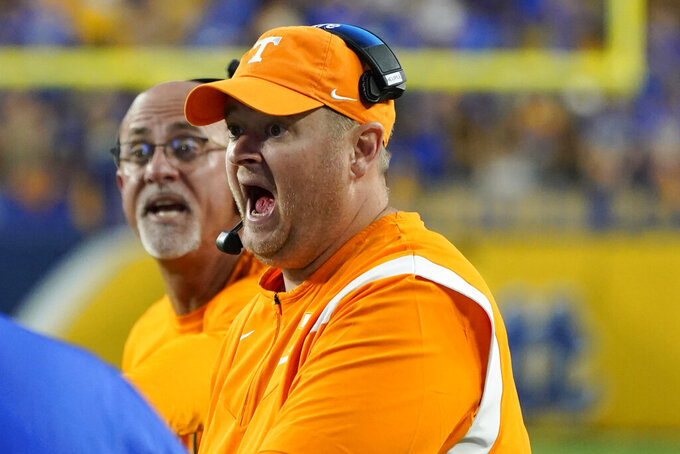 Tennessee head coach Josh Heupel yells to an official after Pittsburgh wide receiver Jared Wayne (5) made a catch along the sideline that was ruled a catch during overtime of an NCAA college football game, Saturday, Sept. 10, 2022, in Pittsburgh. After review, the catch call was overturned. Tennessee won 34-27 in overtime. (AP Photo/Keith Srakocic)

KNOXVILLE, Tenn. (AP) — Coach Josh Heupel's 15th-ranked Tennessee Volunteers have one final chance to work out remaining problems before diving into the Southeastern Conference portion of the season.

And part of the Vols' challenge is not overlooking the Akron Zips on Saturday night to a looming home game against No. 18 Florida.

“The challenge every week is really us,” Heupel said. “And we talk about that every week. Our players have to buy into it."

Tennessee is coming off a 34-27 overtime road win at then-No. 17 Pittsburgh, and the Vols (2-0) survived mistakes by the offense and special teams thanks to a defense that rose to the challenge to escape with the big victory.

Heupel didn't think Tennessee practiced as well as expected a couple times last week, which showed up at times against Pittsburgh.

“Our preparation has to be consistent, your process of how you approach and get to game day is what takes you to game day to play your best football,” Heupel said. "If you ever deviate from that plan and change it, you’re setting yourself up for failure.”

Akron (1-1) is coming off a 52-0 rout at the hands of then-No. 14 Michigan State. Coach Joe Moorhead understands the test waiting for his Zips.

“The ’72 Dolphins and the ’85 Bears were busy this week, so from a scheduling standpoint, we’ll go with Tennessee,” Moorhead deadpanned. “They’ll be riding high. They’re explosive on offense, stingy on defense and play hard on special teams.”

Tennessee linebacker Solon Page III said the Vols are working on consistency no matter the opponent.

The Volunteers are scoring 46.5 points a game, which leads the SEC and ranks 14th nationally. Tennessee has scored at least 30 points in five straight games. The Vols also are averaging 492.5 yards per game in total offense, second in the SEC and 23rd nationally. Wide receiver Jalin Hyatt said they want to be the best.

“We want to be the best offense in the country,” Hyatt said.

Hendon Hooker threw for 325 yards and 2 TDs against Pitt to earn SEC Offensive Player of the Week honors. He has thrown four TD passes with no interceptions through two games.

Who the Zips start at quarterback is a question. Moorhead said starter DJ Irons left the Michigan State game with a “lower body injury and is “day-to-day.” Irons has thrown for 399 yards and 2 touchdowns this season. Irons also is the second-leading rusher with 44 net yards. His backup, Jeff Undercuffler, has thrown for 80 yards.

Tennessee has forcied multiple turnovers in three straight games going back to last season, and the Vols also have at least one interception in four straight games. They have four takeaways this season and are allowing 18.5 points a game.

While college football schedules are made years in advance, this game was a late change less than a year ago. When Heupel arrived at Tennessee, he and athletic director Danny White got Army and its triple-option offense off the schedule by paying $100,000 to break the contract. Akron came on the schedule, giving the Vols two games against Mid-American Conference teams in three weeks to open this season.