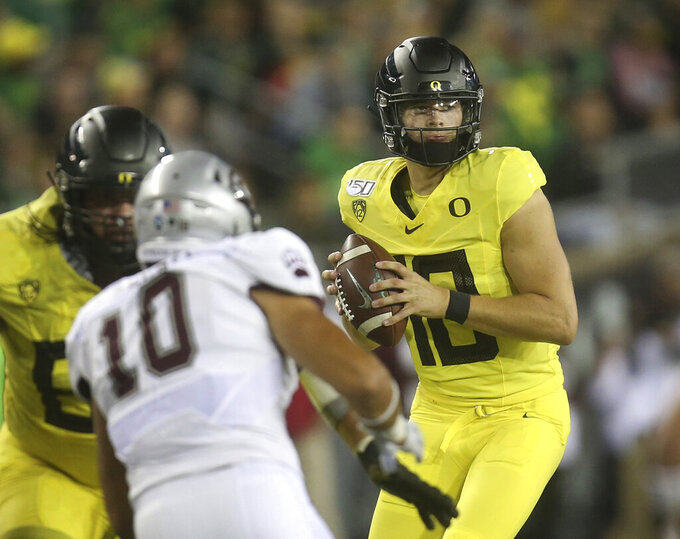 Oregon looks to win its Pac-12 opener for first time since 2014, with a game against nemesis Stanford. The Cardinal are trying to avoid their first three-game losing streak since 2008 in Jim Harbaugh's second season as coach. Stanford is 5-0 after dropping two in a row under coach David Shaw.

Oregon front seven vs. Stanford offensive line. The Ducks have a strong defense that hasn't allowed a TD in back-to-back games in the same season since 1972. Freshman OLB Mase Funa is making a big impact with three sacks and five tackles for loss and goes against an injury-depleted line missing star left tackle Walker Little and probably guard Dylan Powell.

Oregon: QB Justin Herbert. He enters conference play with two impressive streaks. He has thrown at least one TD pass in 31 straight games and has gone 150 attempts without an interception, both the longest active streaks in the FBS. Herbert also has just one INT over his last 298 passes in Pac-12 road games.

Stanford: RB Cameron Scarlett. He has been a workhorse back with 51 carries for 224 yards the first three weeks. He also has 10 catches for 88 yards.

Stanford has won three straight in the series since 1995-97. A win would give the Cardinal their longest streak over Oregon since five-gamer from 1973-77. ... Oregon has outscored opponents 70-12 in the first half this season. ... The Ducks haven't allowed a TD on 27 consecutive drives and haven't allowed a first-half TD all season. ... Oregon leads the nation with 13 players having scored TDs. ... Ducks LB Troy Dye leads all Power 5 players with 334 career tackles and has 18 games with at least 10. ... Stanford is 51-8 at home this decade, the best mark in the Pac-12. ... WR Connor Wedington leads Stanford with 328 all-purpose yards.