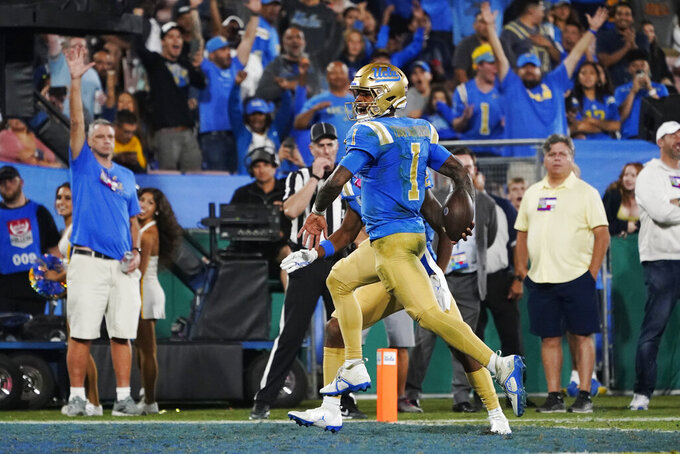 Things to watch this week in the Pac-12 Conference:

The Bruins have a chance to move to 6-0 for the first time since 2005. It won’t be easy, though, as they’ve dropped five straight to Utah. UCLA quarterback Dorian Thompson-Robinson is fresh off a performance against No. 21 Washington (4-1, 1-1) in which he threw three touchdown passes and ran for another. His big day in a 40-32 win earned him Pac-12 offensive player of the week honors. He will be facing a Utah defense led by cornerback Clark Phillips III, who had three interceptions, including one for a touchdown, in a 42-16 win over Oregon State. Phillips was voted the league’s defensive player of the week. Utah boasts a 66-22 mark when ranked in the AP poll under coach Kyle Whittingham.

Southern California running back Travis Dye has five rushing touchdowns this season. He’s a big reason why the Trojans are averaging 42.2 points a game. Washington State is chasing after its first 5-1 start since 2018. The Cougars beat California 28-9 last week behind the play of Cameron Ward, who tossed three touchdown passes. The Cougars beat a Top 25 team on the road already this season, knocking off No. 19 Wisconsin on Sept. 10.

Washington State features a roster that has 23 players from Southern California. ... Utah’s defense is allowing just 155.4 passing yards per game, which is ninth in the FBS. ... The Bruins have won six straight home games dating to last season. The last time the team won more than six in a row at home was over the 2005 and ’06 seasons when they had 10 straight. ... Colorado has a bye week before hosting California. It will be the first game under interim coach Mike Sanford, who takes over for Karl Dorrell. ... The Trojans lead the nation with 12 interceptions. ... Oregon State receiver Tre’Shaun Harrison has 16 catches for 251 yards and a score over his past three games. ... Arizona had 673 yards of offense in a 43-20 win over Colorado last weekend. QB Jayden de Laura had career highs in yards passing (484) and passing TDs (six).

T.J. Bass, Oregon. The left tackle helped the Ducks rush for 351 yards in a 45-27 win over Stanford. Their 9.5 yards per carry average was the highest by the team since the 2013 opener against Nicholls. For his effort, Bass was the league’s offensive line player of the week.

The Beavers enter as a seven-point favorite, according to FanDuel Sportsbook. Stanford returns home for the first time in almost a month after a bye and two road games. Last season, the Beavers halted Stanford’s 11-game winning streak in the series. The Cardinal’s 59 victories over Oregon State are the second-most among any opponent. They have 65 wins over California. Cardinals coach David Shaw is 10-1 versus the Beavers. Oregon State's last victory at Stanford was in 2006.