No. 2 Oklahoma, QB Rattler to open season vs. Tulane 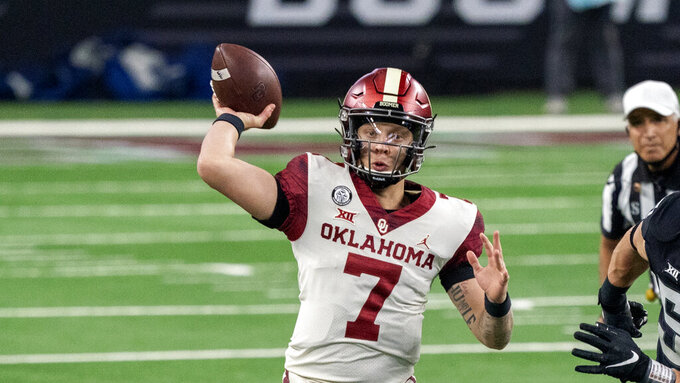 Line: Oklahoma by 31 ½, according to FanDuel Sportsbook.

Oklahoma has its highest preseason ranking since 2011 and seeks its first national title since 2000. The Sooners feature preseason All-America quarterback Spencer Rattler, who is expected to be among the front-runners for the Heisman Trophy. The Sooners want to establish their defense as an effective balance to their typically explosive offense. They have the tools to do it under third-year defensive coordinator Alex Grinch. Tulane is trying to stay focused after getting its opener moved from New Orleans because of Hurricane Ida.

Tulane QB Michael Pratt vs. Oklahoma's defensive line. Pratt passed for 1,806 yards and 20 touchdowns and ran for 229 yards last season as a freshman. He is mobile, but Oklahoma’s deep defensive front, led by Perrion Winfrey, Isaiah Thomas and Jalen Redmond, should be among the nation’s best.

Tulane: RB Cameron Carroll. He ran for 741 yards and 12 touchdowns last season and will need to provide balance for Pratt.

Oklahoma: WR Marvin Mims. The gamebreaker caught 37 passes for 610 yards and nine touchdowns last season. He’s got plenty of talent around him, so others will flourish if defenses pay too much attention to him.

This will be the 1,300th game in Oklahoma history. The Sooners have a 917-329-53 all-time record. ... Oklahoma coach Lincoln Riley turns 38 on Sunday. ... It’s the 22nd consecutive season the Sooners have been ranked in the preseason AP poll. ... Oklahoma defeated Tulane 56-14 in Norman in 2017. ... Tulane has played in three straight bowl games. ... Oklahoma RB Kennedy Brooks is back after sitting out last season with COVID-19 concerns. He has rushed for 2,067 yards and 18 touchdowns in his career.