No. 21 Cincinnati looks to keep momentum vs Tulsa 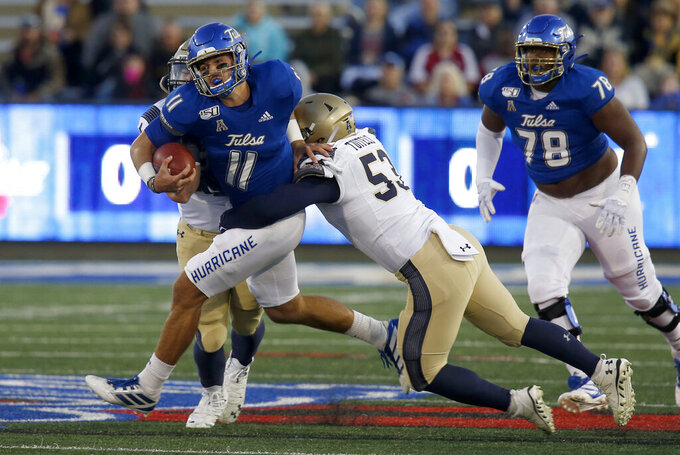 The Bearcats need a win to maintain their edge in the American Athletic East. They knocked off two-time champion UCF and then won at Houston. They've won four in a row since a 42-0 loss at Ohio State, climbing back into the Top 25. Tulsa is looking to regain its footing after a 45-17 loss to Navy.

Zach Smith vs. Cincinnati's secondary: Smith ranks third in the league with 269.7 yards passing per game. He's facing a secondary that has been aggressive the last two games, forcing nine turnovers — seven interceptions and two fumble recoveries. The Bearcats picked off UCF's Dillon Gabriel three times, returning one for a touchdown.

Tulsa: Shamari Brooks is fifth in the league with 77.3 yards rushing per game. He needs a solid showing to take the pressure off Smith.

Cincinnati: Safety Ja'Von Hicks had a pair of interceptions and a fumble recovery in the 38-23 win at Houston, earning the league's award as defensive player of the week.

Cincinnati has won four of the last five in the series. ... Cincinnati's Desmond Ridder ranks fourth in the AAC in passing efficiency. He threw for 263 yards and three touchdowns and ran for 50 yards and a touchdown against Houston. ... The Bearcats will honor their 2009 team in conjunction with the game. That team went 12-0 before losing in the Sugar Bowl. ... Cincinnati is the third ranked team Tulsa will play this season. The Golden Hurricane has lost to No. 18 Michigan State 28-7 and to No. 24 SMU 43-37 in three OTs.