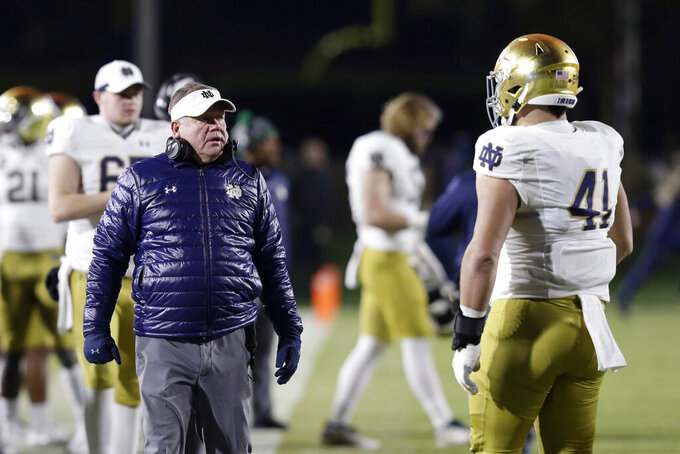 SOUTH BEND, Ind. (AP) — Preparing for Navy’s triple-option offense is an annual headache for Notre Dame, but it’s the Midshipmen’s defense that has coach Brian Kelly reaching for the aspirin.

“I’m really impressed with their defensive structure,” Kelly said. “They’ve been very aggressive. Their defense is so much better at everything they do from coverage to getting after the quarterback (and) tackling.”

After a rare 3-10 finish in 2018, veteran Navy coach Ken Niumatalolo revamped his defensive staff, bringing in defensive coordinator Brian Newberry from FCS power Kennesaw State. Newberry’s multiple schemes, using 4-2-5 and 3-4 principles, have produced an about-face for the Midshipmen, who are riding a five-game winning streak.

Niumatalolo knows playing Notre Dame is never easy, especially with the Irish coming off one of their better offensive performances of the season. In their second straight victory, a 38-7 triumph at Duke, Kelly’s Irish were led by quarterback Ian Book, who threw for four touchdown passes and 181 yards and rushed for a career-high 139 of Notre Dame’s 288 yards.

“We know who they are – it’s going to be really, really hard for us to beat them,” said Niumatalolo, who has been on the winning sideline four times in 22 seasons as an assistant or head coach in the series the Irish dominate 78-13-1 with the help of an NCAA-record 43-game winning streak (1964-2007). “We have to play really well just to have chance.”

“(Perry) can turn a play of zero yards into a touchdown,” Kelly said. “Your discipline has to be second to none.”

The Midshipmen haven’t won six in a row since 1978 when they started 7-0 and were ranked No. 11 under George Welsh and then lost to Dan Devine’s No. 15 Notre Dame, 27-7, in Cleveland’s old Municipal Stadium. It was the 15th straight victory in the series for the Irish, who would stretch the streak to an NCAA-record 43 games before Navy won 46-44 in triple overtime at South Bend in 2007.

The Irish have won 16 straight at Notre Dame Stadium. However, the 273-game home sellout streak will end, dating back to 1973.

The Midshipmen have been extremely impressive inside their opponents’ 20-yard line, producing 26 touchdowns (25 rushing, 1 passing) and two field goals in 29 visits, a percentage of .966 that is tied for fourth with Iowa behind leaders LSU (.980), Georgia (.974) and Virginia Tech (.974). Navy’s only failure came in the Holy Cross opener when the Midshipmen took a knee to end the game.

In 2016 at Jacksonville, Kelly elected to kick a field goal with 7:28 remaining in the fourth quarter to pull within 28-27, figuring a defensive stop would give the Irish a chance to win. Notre Dame never saw the football again as ran out the clock.

Free safety Alohi Gilman will play in his third Notre Dame-Navy game but only the second for Irish. Gilman started at safety for Navy as a true freshman in 2016 and left Kelly impressed with his game-high 12 tackles in Navy’s victory.

“Extremely active, really good tackler – somebody who got our attention immediately,” Kelly said. Gilman then transferred to Notre Dame, sat out 2017 and made seven stops in last season’s 44-22 Irish victory in San Diego.