No. 22 La-Lafayette, Liberty put winning streaks on the line 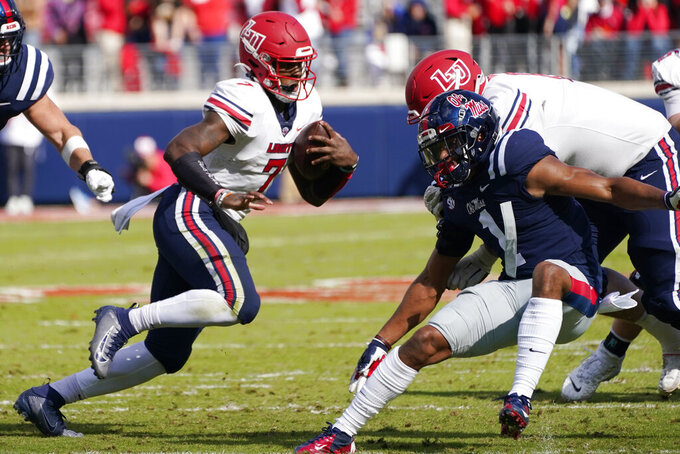 LYNCHBURG, Va. (AP) — Something's got to give when No. 22 Louisiana-Lafayette plays at Liberty on Saturday.

The Ragin' Cajuns (9-1) have won a program-record nine straight, including four in a row on the road, but will be facing a Flames team coming off a bye whose 15-game home winning streak is tied for the fourth-longest in the country.

Louisiana coach Billy Napier sees Flames quarterback Malik Willis as the wild card in the matchup. Willis has thrown for 21 touchdowns and run for 10 more.

Willis “is dynamic, and after you watch closely you understand why everybody in the country is buzzing about the guy," Napier said earlier this week.

But the Flames (7-3) have had trouble giving Willis time to throw. He was sacked nine times and threw three interceptions in their 27-14 loss at Ole Miss before the bye. Liberty's QBs have been sacked 38 times.

Liberty ranks 13th nationally, allowing 18.7 points per game, and the Ragin' Cajuns are next, allowing just 18.9 points per game. Liberty coach Hugh Freeze made pass protection a focus during the week off.

“I probably spent more time with them than ever before last week just trying to figure out ways to give us a chance,” Freeze said. “This group, not only is their D-line talented but also their linebackers and secondary. ... When we protect him we’ve got a good chance to win and we typically don’t turn it over, so that’s a big, big key to us competing in this game.”

The teams have met once before, a 35-14 victory for Louisiana two years ago, but the oddmakers have installed Liberty as a 4 1/2-point favorite, according to FanDuel Sportsbook.

Some other things to watch when Louisiana plays at Liberty:

The Ragin' Cajuns are 14-3 in one-possession games since the start of the 2018 season, including 5-0 this season. In Napier's four seasons as coach, they are 37-5 when scoring at least 20 points and 0-7 when they fail to reach that level.

Willis leads Liberty in rushing with 755 yards despite having also lost 250 yards, mostly on sacks. His total leads all Bowl Subdivision quarterbacks. The Flames got an added boost to their run game at Ole Miss when Shedro Louis ran for 101 yards, including a 28-yard touchdown run, on just seven carries. Louis earlier ran for 170 yards in a loss at Syracuse and has 358 yards in all.

Ragin' Cajuns quarterback Levi Lewis is a dual-threat too, and has thrown for three touchdowns while also running for a TD three times in his career. He's thrown for 15 touchdowns with four interceptions. Louisiana is 20-1 in games where he throws at least two touchdown passes. His 69 TD passes are the most in program history and only Jake Delhomme has more passing yardage.

Willis has thrown nine interceptions, and all have come in three games. Besides Ole Miss, he also threw three against Louisiana-Monroe and Middle Tennessee.

This game marks the second Top 25 opponent to play at Liberty and Freeze said he had no interest in recalling the first. It came against Syracuse in Freeze's first game, which he watched from a hospital bed in a coach's booth while dealing with complications from back surgery.