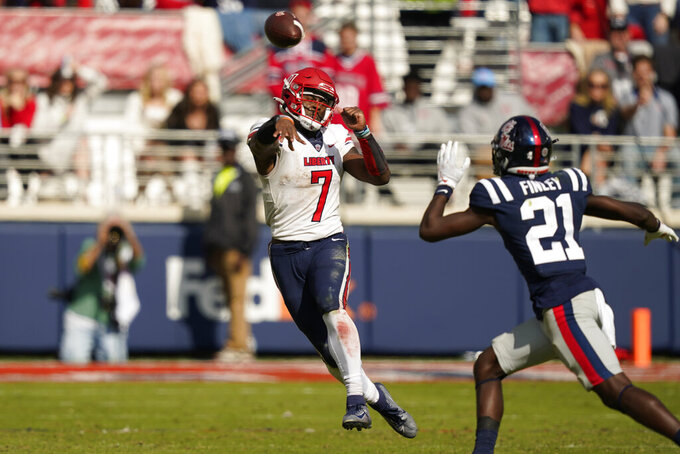 Line: Liberty by 4 1/2, according to FanDuel Sportsbook.

The Ragin Cajuns are looking to solidify their spot in the Top 25, reach the 10-win mark for the third straight year and win their fifth in a row on the road. The Flames can enhance their standing as an up-and-coming program with a victory.

Liberty QB Malik Willis against the Louisiana defense. Willis is projected as a first-round NFL Draft choice and is a contender for a number of postseason awards. He makes things happen with his arm and his legs, but will be going against a defense ranked 14th nationally, allowing just 18.9 points per game.

Louisiana: DL Zi’Yon Hill. He leads the Ragin' Cajuns with 4 1/2 sacks and could present a problem for Willis, who leads Bowl Subdivision quarterbacks with 755 rushing yards. Liberty QBs, however, have been sacked 38 times.

Liberty: RB Shedro Louis. He ran for 101 yards on just seven carries in the Flames' 27-14 loss to No. 10 Mississippi. If he can be a threat in the running game, the Ragin' Cajuns might be less inclined to focus entirely on Willis.

The Ragin' Cajuns have won a school record nine straight since starting the season with a 38-18 loss to Texas. ... Louisiana is 13-1 in November under coach Billy Napier. ... The Ragin' Cajuns are 20-1 when quarterback Levi Lewis throws at least two TD passes. ... Willis has thrown for 21 touchdowns and run for 10. ... Liberty has won 15 straight at home, tied for the fourth-longest streak nationally. ... This marks the first time the Flames have faced teams in the Top 25 in program history. ... The Flames are 25-9 with Hugh Freeze as their coach.