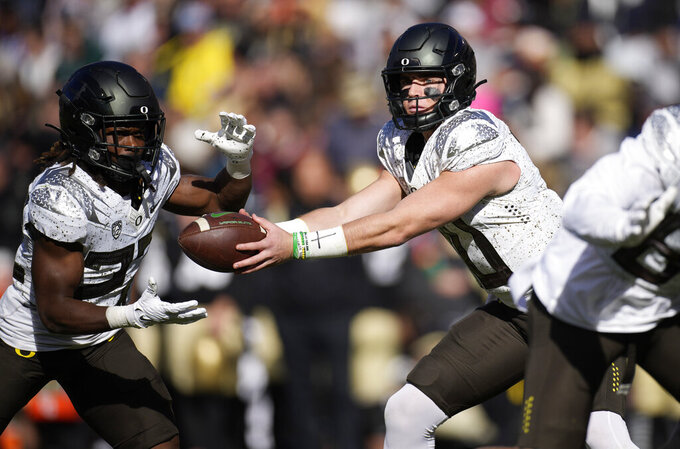 Oregon quarterback Bo Nix, right, hands off the ball to running back Noah Whittington in the first half of an NCAA college football game against Colorado, Saturday, Nov. 5, 2022, in Boulder, Colo. (AP Photo/David Zalubowski)

No. 24 Washington (7-2, 4-2 Pac-12, No. 25 CFP) at No. 6 Oregon (8-1, 6-0, No. 6 CFP), Saturday. Behind transfer quarterback Michael Penix Jr., the Huskies have the most proficient air game in the nation at 370.2 yards passing. Behind transfer quarterback Bo Nix, the Ducks are averaging 520.6 total yards and riding an eight-game win streak. The Huskies are venturing into a tough place to play — the Ducks have tied a school record with 23 straight home wins. Oregon has won 15 of the last 17 games over Washington, but the Huskies still lead the overall series by a 60-48-5 margin. Oregon is a 13 1/2-point favorite, according to FanDuel Sportsbook.

Arizona State (3-6, 2-4) at Washington State (5-4, 2-4), Saturday. The closest game on the conference schedule, with the Cougars a 7 1/2-point favorite, according to FanDuel Sportsbook. With a win, Washington State becomes bowl eligible for a seventh time in eight seasons. The Cougars have won three of the last four games over the Sun Devils.

Safety Jaden Hicks, Washington State. Finished with six tackles, quarterback hurry and a fumble recovery in a 52-14 win at Stanford. Hicks returned a fumble for a 17-yard score in the second quarter to give the Cougars a 28-7 lead.

Colorado (1-8, 1-5) at No. 8 USC (8-1, 6-1, No. 8 CFP), Friday. Probably not. After all, the Trojans are a 34 1/2-point favorite over Colorado and boast a 15-0 all-time mark against the Buffaloes. They've outscored Colorado by a 522-234 margin in the series. The best hope for the Buffaloes is perhaps the Trojans get caught looking ahead. USC plays at UCLA the following week and closes the regular season by hosting Notre Dame.