No. 8 USC focused on short-week visit from woeful Colorado 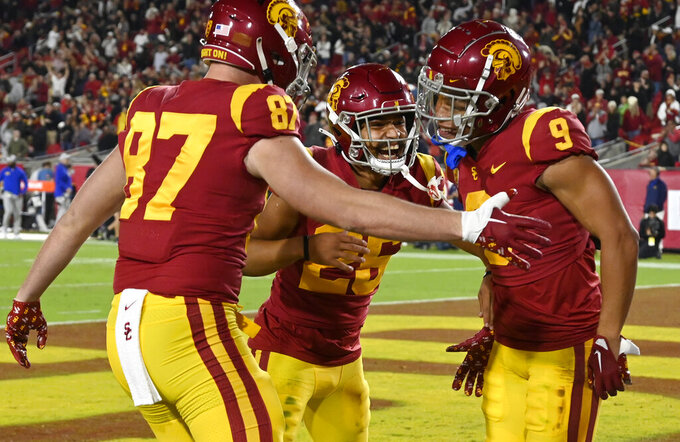 Defensive back Mekhi Blackmon and receiver Brenden Rice will face the teammates they left behind when No. 8 USC (8-1, 6-1 Pac-12) hosts Colorado (1-8, 1-5) in the Trojans' near-annual Friday night television showcase at the Coliseum.

This matchup has many hallmarks of a trap game for the Trojans, who are still in the Pac-12 title race and the College Football Playoff picture despite a struggling defense. The Trojans have given up 115 points in the past three games, forcing USC into two shootout victories and a one-point loss on the road at Utah.

But Riley said the looming matchups with No. 9 UCLA and No. 20 Notre Dame to close the regular season are nowhere near the Trojans' minds until the weekend.

“Honestly, it’s great that it’s a short week,” Riley said. “You’re doing everything in 24 hours less. You’ve got to pack it in. You’ve got to prepare. There’s zero talk of anything like (looking ahead). Right now it’s just a race. That’s what short weeks feel like. It’s just an absolute race the entire week to try to get ready for Colorado.”

Blackmon is the Trojans' fourth-leading tackler and has two interceptions in a busy season, while Rice is USC's fourth-leading receiver with 23 catches for 266 yards. Both would undoubtedly be playing extensively for Colorado, which has the Pac-12's least productive offense and the fourth-worst defense in the FBS with three games remaining in the program's 15th losing season in 17 years.

The Buffaloes are following up last week's 49-10 loss to Oregon with a second straight showdown with a top-10 team, but they can look back to a 34-point performance at Arizona State just two weeks ago as reason for optimism in a grim time.

“We’re going to be ready for this game,” Colorado interim head coach Mike Sanford said. "Everybody’s not going to give us a chance, and we’re going to go in there with belief..”

The Trojans' one-year turnaround from a 4-8 season is something to which the Buffs can aspire next season, but that transformation has only been possible because of quarterback Caleb Williams.

USC likely would be out of the national title race without the Oklahoma transfer, who has passed for 1,152 yards with 14 touchdowns and no interceptions in the past three games — including the last two without his top two receivers, Jordan Addison and Mario Williams, who are both close to returning from injury.

Caleb Williams' 28 TD passes are the third-most in the FBS, while his one interception on 316 pass attempts is the fewest in the nation. Sanford called those numbers “almost mindboggling.”

“Their record might not show it, but they haven’t given up on the season yet,” Caleb Williams said of Colorado. “Those guys are still out there fighting, and so we’re not going to take anyone lightly. No, we’re going to give that team respect, and we’re going to go out there and play our game."

USC is 15-0 against Colorado in a rivalry first contested in 1927. The Trojans are 10-0 since the Buffs joined the Pac-12, but Colorado got frustratingly close to beating a few Clay Helton teams over the previous seven seasons.

USC's defensive numbers are fairly dire over the past three games as opposing offenses figure out the weaknesses in a group that didn't get nearly as much of an offseason talent injection as the offense did. Yet the Trojans have playmakers: They're 16th in the nation with 18 takeaways, including third with 14 interceptions, while Tuli Tuipulotu is the FBS leader with nine sacks.

Rice led all Colorado wide receivers with 21 catches for 299 yards and three TDs last season before his transfer to USC. Jordyn Tyson stepped into the void and put up a breakout season this fall with 22 catches for 470 yards and four TDs, but the freshman is out for the rest of the season after injuring his leg against Oregon.

USC has committed an FBS-low two turnovers this season, and one — a “fumble” last week against California — was credited to them by a little-known rule that labels a failure to recover an onside kick as a turnover. Otherwise, Williams' one interception is the Trojans' only turnover of the season.

While several players and coaches followed Riley and Williams from Oklahoma to USC, Colorado linebacker Robert Barnes left Norman for Boulder after the 2020 season. Barnes has 27 tackles while playing in all nine games for Colorado this season.