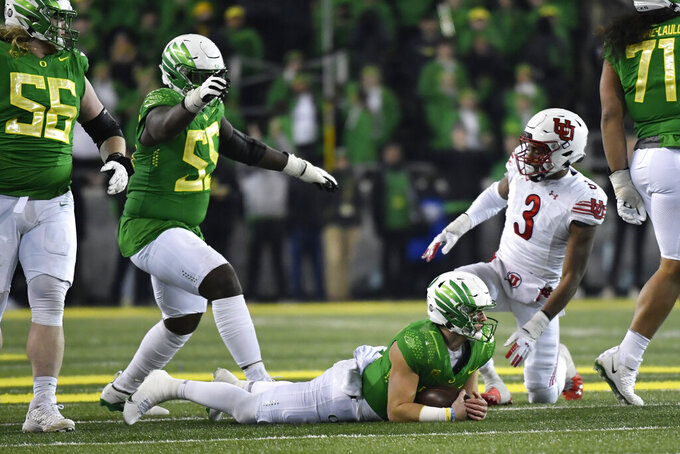 Oregon quarterback Bo Nix (10) lays on the ground after getting past Utah linebacker Mohamoud Diabate (3) as Oregon offensive lineman Marcus Harper II (55) signals a first down during the second half of an NCAA college football game Saturday, Nov. 19, 2022, in Eugene, Ore. (AP Photo/Andy Nelson)

BOULDER, Colo. (AP) — Here are some things to watch this week in the Pac-12 Conference:

A win and the Oregon Ducks qualify for a fourth straight appearance in the Pac-12 championship game. That would mean a showdown with No. 5 USC, a team Oregon hasn’t faced this season. First things first: rival Oregon State. This marks the 126th all-time meeting between the Beavers and the Ducks, with Oregon leading 67-48-10. The Beavers have a 10-1 overall record at Reser Stadium dating to 2021.

The Trojans can bolster their resume as they try to earn a spot in the College Football Playoff. They're a 5 1/2-point favorite over the Fighting Irish, according to FanDuel Sportsbook. The Trojans have already secured their place in the Pac-12 title game on Dec. 2 in Las Vegas. USC has a 3-7 mark over its last 10 games against Notre Dame. USC quarterback and Heisman Trophy candidate Caleb Williams has thrown 33 touchdown passes and run for seven more.

Oregon defensive back Bennett Williams. The senior from California had two interceptions and 14 tackles in a 20-17 win over Utah last weekend. Williams was named the league's defensive player of the week.

The Huskies have won five straight over the Cougars heading into the 114th edition of the Apple Cup ( Washington leads 74-33-6 ). Washington still has an outside shot at making the Pac-12 title game, but needs a combination of results to secure a spot. Coach Kalen DeBoer has guided the Huskies to nine wins this season, which is more than any first-year coach in program history. His reward was a recent contract extension through the 2028 season. Washington State is chasing its first eight-win season since 2018. The Huskies are a 1 1/2-point favorite.