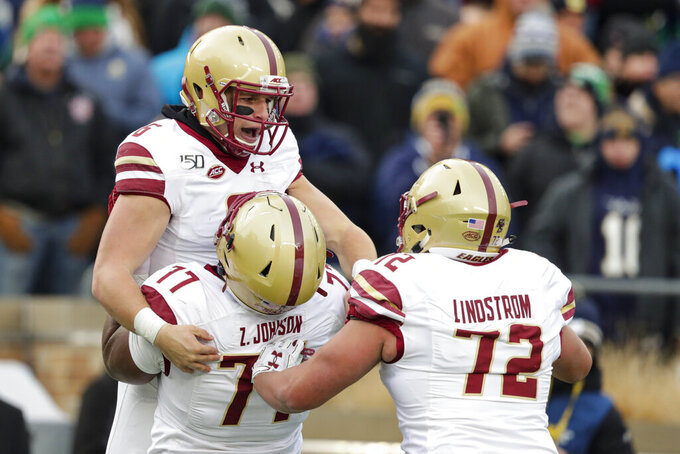 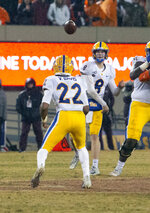 PITTSBURGH (AP) — For the first time in two years, Pittsburgh heads into a game with its preseason goal of winning the Atlantic Coast Conference Coastal Division title out of reach.

The Panthers’ chances of earning a second straight berth in the ACC title game vanished in the cold November rain in a shutout loss to Virginia Tech last week.

Still, coach Pat Narduzzi is confident his team will have plenty of motivation for the regular-season finale Saturday against Boston College.

“I don't think our goals, our kids are going, ‘Oh, my gosh, we don't have that, let's shut it down,’” Narduzzi said. “I don't think that's in our mentality. I know it's not in our coaches' or my mentality. It's not even there.”

A victory would give Pitt (7-4, 4-3 ACC) its first eight-win season since 2016 and third in Narduzzi’s five years with the team. The Panthers have won at least eight games three times in a five-year span just twice since 1983.

“Yes, it matters,” Narduzzi said. “Seven is not as good as eight.”

Maybe, but seven is considerably better than five, which is where the Eagles (5-6, 3-4) find themselves following consecutive losses to Florida State and Notre Dame, the latter a 40-7 rout at the hands of the Fighting Irish last weekend that did little to bolster Boston College head coach Steve Addazio’s standing. Addazio is 43-44 in seven seasons with the Eagles, and a second straight swoon down the stretch would do little to quell push for a change.

Something the Eagles have not done of late. Boston College has won just twice following an auspicious 3-1 start.

“I think we've got a bunch of guys that play with a lot of intensity and played well at times,” Addazio said. “Hopefully, all these little things along the way, it's called development. Hopefully, we can improve, and that's what it's all about.”

The Eagles lead the ACC in rushing behind junior A.J. Dillon, who is third in the country in yards rushing (1,507). Dillion will face the best run defense in the ACC. The Panthers are allowing just 92.6 yards on the ground a game, the sixth-lowest total in the FBS.

“I mean, he's a hoss,” Narduzzi said of Dillon. “He's an NFL guy. I assume leaving this year, I don't know. That's what all the draft predictors are, and he's a load. He's the third leading rusher in the country for a reason. He's physical.”

Pitt’s pass-centric offense fell apart on the road against Virginia Tech. Quarterback Kenny Pickett completed just 10 of 26 passes for a season-low 103 yards. Drops continue to be a problem for Panther wide receivers and tight ends. Narduzzi counted four drops in the first half against the Hokies and when Pitt fell behind by double digits, Virginia Tech was able to tee off.

The Panthers will say goodbye to 14 seniors, including safety Damar Hamlin and cornerback Dane Jackson. The two are part of a secondary that’s evolved from a weakness into a strength. Pitt’s secondary is among the most aggressive in the ACC.

“Our kids have developed,” Narduzzi said. “When you look at where they were four years ago to where they were a year ago to where they are now, (Hamlin is) playing at a high level, and he's playing on a pretty darned good defense right now, and again, we'll find out how good (the defense is) with two more games to go, see if they can finish strong.”

Boston College will need to get something going on the ground to take some of the pressure off sophomore quarterback Dennis Grosel, who is completing just 48% of his passes.