Purdue wary of Illini as Boilermakers try to go 2-0 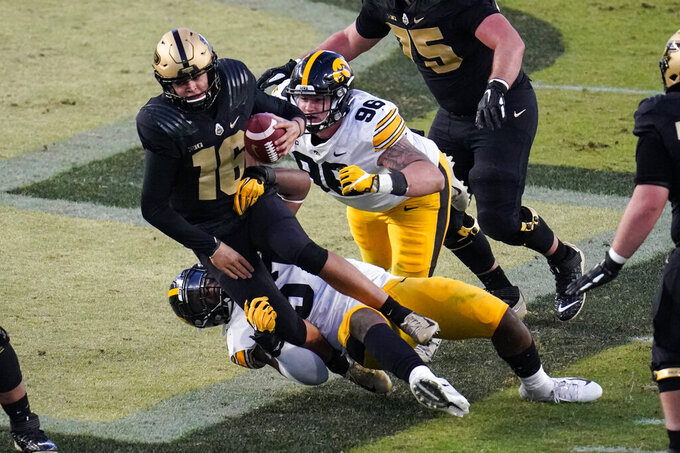 CHAMPAIGN, Ill. (AP) — Purdue is fresh off a minor upset over Iowa. Illinois is reeling from a 45-7 drubbing at Wisconsin.

Purdue coach Jeff Brohm made it clear the Boilermakers are taking nothing for granted when the two teams meet on Saturday.

“Illinois is a team that put it to us last year, pure and simple. They beat us and they beat us bad. They embarrassed us on our home field,” Brohm said. “They were more physical than us. They played harder than us and they outcoached us.”

Lovie Smith's Illini beat Purdue 24-6 last year, ending a three-game skid to the Boilermakers in a series that dates to 1890. But Illinois did not look good against the Badgers in its opener a day before Purdue edged Iowa 24-20.

“Friday night’s game … was a disappointing game,” Smith said. “Normally, you get to the first game and truly see where you are and as I said we are not as far along as I hoped we’d be. But we still have time to get better. We watched the video with our team and now we’re moving on to Purdue.”

Brohm should be on the sidelines at Memorial Stadium after a 10-day isolation period following a positive COVID-19 test. His younger brother, Brian, called the plays in the win over the Hawkeyes.

SO FAR, SO GOOD

The big question all week was whether Illinois would even play.

Smith said Illinois has shown no COVID-19 positive tests despite several Wisconsin team members testing positive for the virus in the in the aftermath of the Illinois game. The Badgers have since canceled Saturday's game at Nebraska.

“Our team is clean,” Smith said. “We’re kind of hunkered down in the bunker. We have a protocol in place that we follow daily. Assume everybody else is doing the same thing. But I know things can change. I know there’s an outbreak all over the country right now. But right now for our football team, not much has changed.”

Purdue QB Aiden O’Connell threw for 282 yards and three touchdowns and two interceptions against Iowa. Look for Brohm to cut O’Connell loose against an Illinois secondary that struggled mightily against Wisconsin.

Two Illini quarterbacks, starter Brandon Peters and backup Isaiah Washington, managed to go only 8 of 22 passing for 87 yards. Peters gained 75 yards rushing on scrambles and designed runs, but overall the offense was only able to manage eight first downs.

Purdue’s Zander Horvath had 21 carries for 129 yards against Iowa (6.1 yards per carry). Expect Horvath to at least match that against Illinois. With the exception of the quarterback, the Illini running game looked tepid against the Badgers. Mike Epstein, injury plagued the last three years, was limited to eight carries for 36 yards.

Illinois linebacker Jake Hansen left last week’s game in the first half with an apparent head injury and was replaced by Tarique Barnes, who received his first significant playing time. Barnes had a team-high 11 tackles (seven solo), a sack, and a 39-yard fumble return for a touchdown.

“You know when your name’s called, you've got to be ready to go,” Barnes said. “You get your shot and you've got to take it. That’s the bottom line to it.”

It’s unclear whether Hansen will be available for Saturday’s game. Last year, Hansen led the nation in forced fumbles. He had 72 tackles, 7.5 tackles for loss, 3.5 sacks and one interception. Despite Barnes’ performance last week, losing Hansen would be a major blow to Illinois.

Illinois has won 23 consecutive home openers dating to 1997. It’s the fourth-longest active streak in the nation behind only Florida (31), Oklahoma State (25) and Wisconsin (25).