QB Anthony Brown getting his chance with No. 11 Ducks 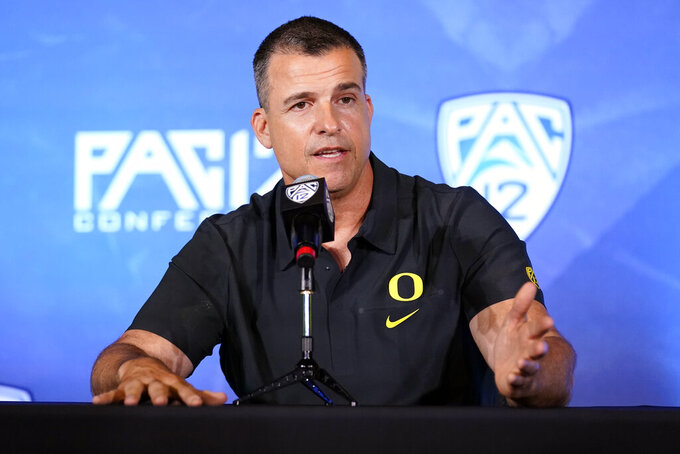 The turbulence of last year helped prepare Anthony Brown for taking over at Oregon this season.

Brown, a sixth-year senior and the Ducks' presumed starting quarterback, suggested he and the team are stronger after enduring a pandemic-shortened season made rougher by delays and cancellations.

“It was hard. I mean, any competitor is going to be upset about anything like that,” Brown said at Oregon's recent media day. “But I would say it was needed for what's about to come.”

Oregon heads into the season at No. 11 and is the highest-ranked team among the five Pac-12 schools that made The Associated Press Top 25.

Tyler Shough was Oregon's starting QB last season, but Brown saw playing time in the Pac-12 championship game and the Fiesta Bowl. Shough transferred to Texas Tech in the offseason.

Meanwhile, Brown announced he was going to stay at Oregon, taking advantage of the NCAA decision to grant players an extra year of eligibility because of COVID-19.

A New Jersey native, Brown came to Oregon in April 2020 from Boston College. His career with the Eagles was marred by two serious knee injuries that sidelined him for parts of the 2017 and 2019 seasons.

Brown will be working under offensive coordinator Joe Moorehead, who wasn't able to show much of what he had planned for the Ducks last season, his first in Eugene.

“He (Brown) has done a very good job from a performance standpoint, from a leadership standpoint, taken on Moorhead’s offensive scheme. At the same time, the freshmen behind him have done an excellent job as well and it merits them getting an opportunity to compete for that position as well," coach Mario Cristobal said.

Oregon went 4-3 overall and 3-2 in the coronavirus-shortened season. The Ducks got into the Pac-12 championship game when Washington couldn't field enough players, and defeated USC 31-28. Oregon went on to play in the Fiesta Bowl, but fell to Iowa State 34-17.

“What excites me the most is we’re throwing some serious adversity and challenges at these guys,” Cristobal said. “We’re pushing them hard. The only response has been, ‘Bring it.’"

Kayvon Thibodeaux is poised for what could be his final season before going pro. The 6-foot-5, 258-pound defensive end has even made a bold proclamation: He's gunning for the Heisman.

At Oregon's media day, he listed his goals.

“Perfection. Winning every game, being able to play for a national championship and winning fall camp. Me personally, I am trying to be in the Heisman race, and be in the Heisman conversation,” he said. “Twenty sacks would be a blessing for me."

Thibodeaux, officially a sophomore, is projected to be among the top picks in the 2022 NFL draft should he decide to leave Oregon early.

The Ducks had several players besides Shough who moved on in the offseason. Running back Cyrus Habibi-Likio transferred to Boise State and linebacker Isaac Slade-Matautia is headed to SMU.

Also gone are offensive lineman Penei Sewell, the seventh overall pick in the NFL draft by the Detroit Lions, and safety Jevon Holland, a second-round pick by the Miami Dolphins.

One of the Oregon's expected strengths is the running game, led by CJ Verdell and Travis Dye.

Dye, also a junior, was the team's top running back last season, with 443 rushing yards. He was also the lone Pac-12 running back with at least 400 yards rushing and 200 yards receiving (239).

Oregon faces No. 4 Ohio State on Sept. 11 in Columbus, a game that's considered to be a big indicator of how well the Ducks will fare this season.

But first they'll face Fresno State on Sept. 4 at Autzen Stadium, which will allow capacity crowds this season.

“I’m excited to play in this stadium,” Brown said. “I grew up watching games, I grew up loving Oregon. So this is an exciting one for me, especially since I’m new here, I’ve never played in this stadium yet. So, I’m just like a little kid getting candy on Halloween.”