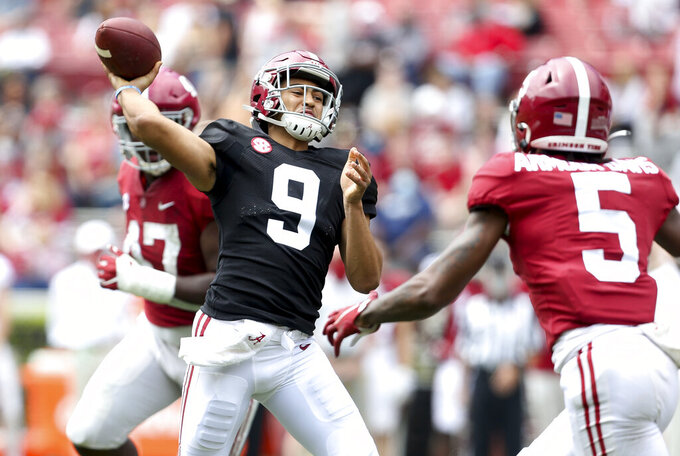 TUSCALOOSA, Ala. (AP) — Bryce Young made a juke move to elude a rushing defender, set his feet and launched a quick pass for a big gain to tailback Roydell Williams on the opening drive.

He also lost a fumble that was recovered for a touchdown.

The Alabama sophomore quarterback showed in Saturday's spring game at Bryant-Denny Stadium why he's regarded as the frontrunner to replace Heisman Trophy finalist Mac Jones. It was also clear that the highest-rated quarterback signee of the Nick Saban era is a work in progress, and so is an offense with some huge voids to fill along with key returning players being held out.

Of course, the defending national champions and their young quarterback know it's just April.

“The pocket collapses on him and he was in some tough situations relative to that,” Saban said. “I think he’s done a really good job all spring. We continue to work on him kind of having a presence out there that affects other people in a positive way. And I think he’s starting to get more and more respect from the other players by the way he plays.”

The 6-foot, 194-pound Young is competing with fellow sophomore Paul Tyson — the great grandson of former Alabama coaching legend Bear Bryant — and freshman Jalen Milroe, who was held out of the game.

He was thought to perhaps have a chance to compete with Jones for the job starting last spring after arriving as the nation's top quarterback prospect. But then practices were called off because of the pandemic.

Young ran the first-team offense against the first-team defense, completing 25 of 44 passes for 333 yards and a 59-yard touchdown to tight end Cameron Latu.

He also had his first chance to lead a game-winning drive at Alabama, even if it was just an end-of-spring scrimmage. He took the White team down the field in the final minutes with the game tied, setting up a short field goal for a 13-10 win over the Crimson.

“I think Bryce has put in a lot of effort this spring in just understanding the offense and trying to improve on himself and also bring the offense together," wide receiver Slade Bolden said. “He’s shown some leadership skills. He’s also done a great job of executing on the field.”

There are plenty of new faces on the offense, from Young to new offensive coordinator Bill O'Brien, a former Houston Texans and Penn State head coach. Heisman Trophy-winning receiver DeVonta Smith and fellow finalists Jones and tailback Najee Harris are among the departed stars from that unbeaten team that averaged 48.5 points.

Young did have a couple of mistakes, including a fumble that was recovered in the end zone by linebacker Jaylen Moody late in the first half. He also had a surefire pick-six interception chance dropped.

A number of players were out for the game, including the top returning rusher and receiver in Brian Robinson Jr. and John Metchie III, along with linebackers Will Anderson Jr. and Christian Harris.

Some young talent got a chance to shine, including freshman wide receiver Agiye Hall. After an acrobatic first-half catch, Saban told ESPN: “He's one of the most explosive players on this team.” Hall later pulled down a sideline catch, just getting a foot down.

Alabama allowed half-capacity attendance at Bryant-Denny in the game because of COVID-19, and announced the crowd at slightly less than that (47,218). Masks were required, but many fans didn't appear to be wearing one in the stands.

Saban watched the spring game from the field, coaching up players in between plays. He nearly got run into during an interception return but joked that he wore his pink suit in part so he'd stand out more clearly for the players.

“Basically, the players know that if they run into me, it’s very similar to running into the goal post,” Saban said, joking. “So it’s not a good choice and decision for them, so they usually avoid me. And I wear a jacket like this so they can see where I am, for their safety, not really for mine.”