Ramsey leads No. 15 Northwestern past Auburn in Citrus Bowl 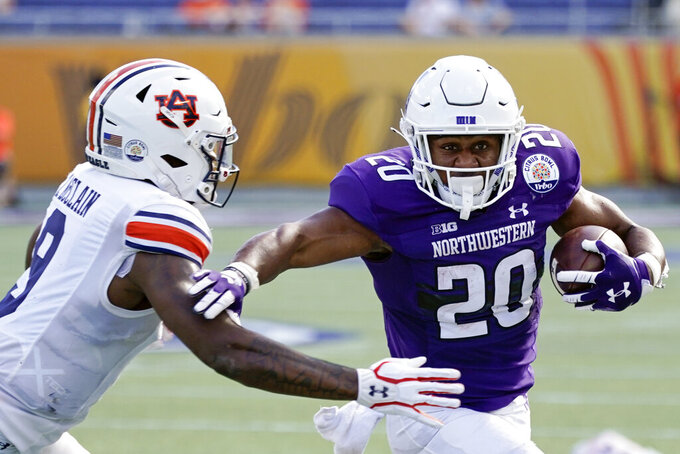 Peyton Ramsey threw three touchdown passes and ran for a score, and the 15th-ranked Wildcats clamped down defensively to beat Auburn 35-19 in the Citrus Bowl on Friday.

Ramsey, a graduate transfer, totaled 291 yards passing and 50 yards rushing for Northwestern (7-2), which won its fourth straight bowl game. Ramaud Chiaokhiao-Brown, John Raine and Riley Lees had touchdown catches for the Wildcats, who bounced back from an ugly loss to Ohio State on Dec. 19 in the Big Ten championship game.

It was the final game for the 73-year-old Hankwitz, who is retiring after a 51-year coaching career that included 400 victories at nine schools. He was the defensive coordinator for Colorado's 1990 national championship team and spent the last 13 seasons as Northwestern's coordinator.

“For Hank, you want to talk about the (legend), think about this: 580 career games coached, 400 career wins, 288 of those as a defensive coordinator, 11 conference championships and a national championship,” Northwestern coach Pat Fitzgerald said. “There’s a lot to be thankful for — our seniors, to Hank and our players down here.”

Bo Nix threw for 292 yards for Auburn (6-5) but was often frustrated by Northwestern’s defense, which came in allowing 15.5 points per game, ranked fifth in the nation. Auburn was led by interim coach Kevin Steele following the Dec. 13 firing of Gus Malzahn and was missing several key players.

“We’re Auburn football and we’re never going to make excuses for who’s out there and who’s not out there. It’s next man up,” Steele said. “It doesn’t matter — COVID, injury or opt-outs, we don’t (make excuses). We had some young guys who did some really good things that are going to help them for the future of the program.”

Auburn got within 14-13 when Nix hit Elijah Canion for a 57-yard touchdown midway through the third quarter. But Ramsey responded with a 30-yard touchdown run late in the quarter.

“On the 30-yard run, it was a look we had seen a couple times earlier in the year, but this time they didn’t spy me,” Ramsey said. “I was able to get out in the open field and get in the end zone. More than anything, I got out of the pocket and saw some green grass.”

Linebacker Paddy Fisher, the nation’s active leader in tackles coming into the game, drilled Nix for no gain on fourth-and-1 on the second play of the fourth quarter. Cam Porter had seven carries on the ensuing drive, including a 1-yard plunge into the end zone that put Northwestern ahead 28-13. Porter rushed for 98 yards on 33 carries, and the Wildcats offense finished with 457 yards and 25 first downs.

The Tigers failed to convert 10 of their first 11 third downs, were unsuccessful on their first two fourth-down tries and mustered 361 yards and 18 first downs. For the game, the Tigers were 2 of 13 on third downs.

Ramsey put Northwestern ahead 14-0 on first-quarter TD passes of 35 yards to Chiaokhiao-Brown and 6 yards to Raine. His final touchdown pass, to Lees, put the Wildcats ahead 35-13 midway through the fourth quarter.

“We stumbled in a couple of games, but we wouldn’t be where we’re at today without Peyton Ramsey,” Fitzgerald said. “Great leader, great teammate and you can tell that he is from a coaching family. And he’s just so unflappable.”

Both teams were without major contributors because of COVID-19 protocols, injuries and opt-outs. Auburn running back Tank Bigsby didn’t make the trip for medical reasons, and top wideout Anthony Schwartz and defensive back Roger McCreary opted out to prepare for the NFL draft.

Fitzgerald and several Northwestern players were visibly emotional while celebrating with Hankwitz after the game.

“When you start, you don’t plan how many years that you’re going to coach,” Hankwitz said. “I’ve been fortunate to work with some great head coaches. … When I had a chance to come here (to Northwestern) I didn’t realize how fortunate I was.”

Bryan Harsin, hired out of Boise State to replace Auburn’s Malzahn, was on the field before kickoff and watched the game from a suite.

Auburn: Harsin will have plenty of talent to build his offense around with Nix and Bisby expected back next season.

Northwestern: Fitzgerald has established the Wildcats as a consistent contender in the Big Ten and the future should be bright. The first priority: Finding a replacement for Ramsey, who had a solid season after transferring from Indiana.

Auburn: Opens its season at home against Akron on Sept. 4.