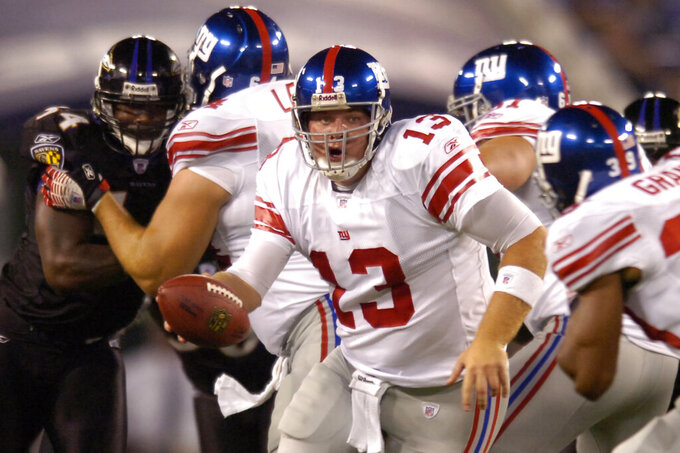 FILE - In this Aug. 19, 2007, file photo, New York Giants quarterback Jared Lorenzen (13) hands off to running back Ryan Grant (39) during the team's preseason NFL football game against the Baltimore Ravens in Baltimore. Lorenzen, a husky left-handed quarterback who set multiple Kentucky passing and offensive records before backing up Eli Manning on the Giants’ Super Bowl-winning 2007 team, has died. He was 38. A release from the school said Lorenzen’s family announced his death on Wednesday, July 3. (AP Photo/Gail Burton, File)

Popular around Lexington for his outgoing personality, Lorenzen was listed at 6-foot-4 and 275 pounds his senior season and known by several nicknames including "The Hefty Lefty." The Covington, Kentucky, native holds school records including 10,637 offensive yards on 1,793 plays from 2000-03. He also tops UK passing marks for yards (10,354) and attempts (1,514), including a record 321 throws in 2000.

The Giants tweeted that Lorenzen "was an important member of our 2007 team, one that created its own destiny. Our thoughts are with Jared's family and friends who loved and appreciated him so much, just as our organization and fans did."

Lorenzen was elected to the UK Athletics Hall of Fame in 2015. Athletic director Mitch Barnhart said "We are deeply saddened to learn of Jared Lorenzen's passing" in a statement and added, "He was a true Wildcat and a man whose love for the University of Kentucky was plain to see well after his playing days were over."

Lorenzen played with the Northern Kentucky River Monsters among several indoor teams before retiring in 2013.