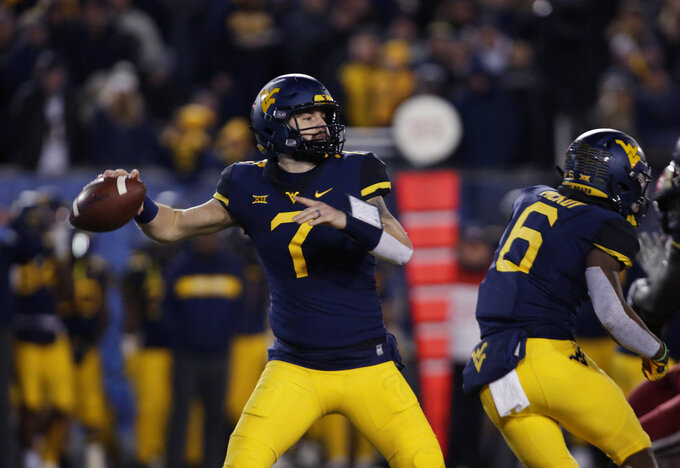 West Virginia quarterback Will Grier (7) looks for a receiver during the first half of an NCAA college football game against Oklahoma on Friday, Nov. 23, 2018, in Morgantown, W.Va. (AP Photo/Raymond Thompson) 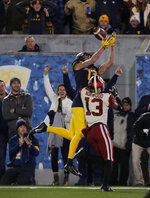 MORGANTOWN, W.Va. (AP) — No. 6 Oklahoma has been scoffed at for handing points and yards to opponents like presents, and it wasn't any different against No. 12 West Virginia. Yet a couple of defensive gems now have the Sooners playing for their fourth straight Big 12 championship.

Oklahoma scored two defensive touchdowns to support another brilliant performance by Kyler Murray and the Sooners beat No. 12 West Virginia 59-56 Friday night to earn a spot in next week's title game.

Oklahoma (11-1, 8-1, No. 6 CFP) survived a wild and mostly defenseless affair that featured 1,372 yards of offense to earn a rematch Dec. 1 in Arlington, Texas, against No. 11 Texas, which beat Kansas earlier Friday.

"We'll certainly be excited to play those guys," Oklahoma coach Lincoln Riley said. "But, more than anything, one huge goal we set out was we want to be the only team ever to win four of these in a row."

Oklahoma also kept its College Football Playoff chances alive. The Sooners remain the only Big 12 team that West Virginia (8-3, 6-3, No. 13 CFP) hasn't beaten since the Mountaineers joined the league in 2012.

Oklahoma players sang West Virginia's anthem, John Denver's "Take Me Home, Country Roads" on the way to the locker room after the game.

"It was fun," Murray said. "There's no other way to describe it."

Murray finished 20 of 27 for 364 yards and three touchdown passes and converted a late fourth down to seal a matchup of Heisman Trophy hopefuls. West Virginia's Will Grier threw for four touchdowns and a career-high 539 yards on 32 of 49 passing. But Grier lost two fumbles, both of which were returned for touchdowns.

"When you score two touchdowns defensively, you like your chances," Riley said.

With the Mountaineers trying to regain momentum early in the fourth, Grier was spun around by defensive end Kenneth Mann during a scramble and lost the ball. Oklahoma linebacker Curtis Bolton picked it up and ran 48 yards for a touchdown to put the Sooners ahead 59-49.

"I'm disappointed for our seniors. We fought hard and came up a little bit short," West Virginia coach Dana Holgorsen said. "As well as we played offensively, giving them 14 points is inexcusable."

Grier said he was trying to throw the ball out of bounds when Mann hit him.

"They got to me quite a bit tonight," he said "To scoop and score both of those is pretty impressive on their part. They made some plays."

Martell Pettaway's 17-yard TD run with 4:20 left made it a one-score game. But Oklahoma recovered the ensuing onside kick and ran out the clock, thanks to Murray, who found CeeDee Lamb for 8 yards on a fourth-and-5 with 2:10 from the West Virginia 40.

Oklahoma: The Sooners were unremarkable on defense yet again, but those two stellar plays were the difference. On offense the Sooners surpassed 290 rushing yards for the sixth straight game, coinciding with their six-game winning streak. They also improved their national-best road winning streak to 20 games dating to the 2014 season.

West Virginia: The Mountaineers matched the Sooners punch for punch offensively but made a few more mistakes than Oklahoma and finished the regular season with two straight losses, a huge disappointment for a team that believed they had the right mix to win their first league championship. The Mountaineers will also likely miss out on a New Year's Six bowl for the seventh straight season.

The Sooners' Kennedy Brooks ran for a season-high 182 yards while Murray had 115 yards on the ground, including a 55-yard TD. He averaged 12.7 yards per rush.

West Virginia will fall in the AP Top 25 but should maintain a top-20 ranking.

Oklahoma: Meets Texas, which beat the Sooners 48-45 on Oct. 6 in Dallas. Oklahoma is going after its fourth straight league title.

West Virginia: Will await the Dec. 2 announcement of its bowl destination.