'Some weirdness' at Big 12 with future and soon former teams 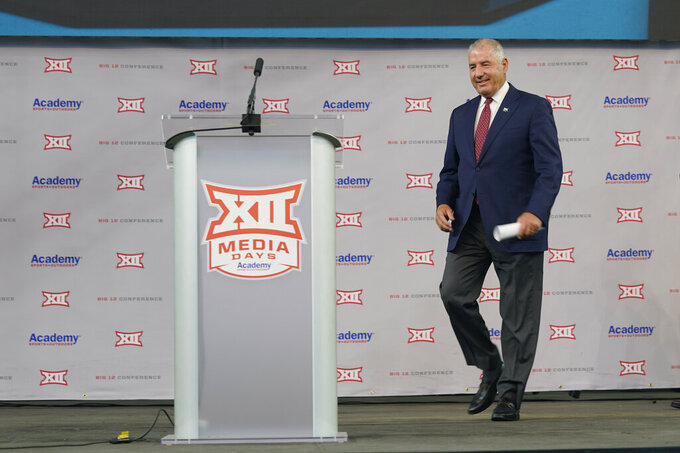 FILE - Big 12 Commissioner Bob Bowlsby walks to the podium to speak during the Big 12 football media days July 14, 2021, in Arlington, Texas. The conference is holding its spring meetings. Bowlsby, who announced his retirement earlier this year with plans to stay on until his replacement is in place, figures he is down to 30-90 days on the job. (AP Photo/LM Otero, File)

IRVING, Texas (AP) — There are representatives from the Big 12's four future members attending the conference's spring meetings, along with the lingering presence of Texas and Oklahoma, the league's only football national champions who still are three years away from their scheduled departures to the SEC.

Outgoing commissioner Bob Bowlsby, who announced his retirement earlier this year with plans to stay on until his replacement is found, figures he is down to 30-90 days left on the job.

“This meeting has got some weirdness to it,” Bowlsby said. “It would be less than forthright to not admit that there’s some strangeness to it, and perhaps even some periods when there’s a little bit of tension. But, you know, people are working together in good faith. And we get along and work together because we have to."

A time of membership transition in the Big 12 comes when it, like schools and leagues across the country, are dealing with transfer rules and how student-athletes are getting compensated for use of their names, images and likenesses, and just who is involved with that process.

“I don’t know that the change in membership is causing us any particular scrambling," Bowlsby said. “The members going out, the continuing members, we all share the same challenges. ... It’s not like they’re coming in to a uniquely different environment with a different set of challenges.”

BYU will officially join the Big 12 next summer. The growing anticipation is that current American Athletic Conference schools Cincinnati, Houston and UCF will as well, instead of having to wait until July 1, 2024.

“I think the tenor’s good. I mean, honestly, you move on from some of the decisions. We know the two schools, Oklahoma and Texas, are leaving. But at the same time, they’re league members for the next two years,” West Virginia athletic director Shane Lyons said. “And with the four new schools coming in ... they start having a voice in the process. You’re looking at the league as a whole to say what’s best for the league.”

Athletic directors had their joint meeting Thursday with the Big 12 board comprised of the president or chancellor from each member school. The board's executive session Friday, which is expected to include an update on the search for a new commissioner, will wrap up the meetings.

Texas AD Chris Del Conte said there is “nothing that's contentious.” He described the meetings business as usual while including discussions about the reshaping of the league.

“It’s a little different, but we’re all participating and making decisions that are going to best serve the institutions, for us for a shorter period of time than the others," Oklahoma AD Joe Castiglione said.

Bowlsby said the agenda for the annual meetings that began Wednesday maybe should have been color-coded. There were some items for the current 10 members, some for all 14 schools, others for the future schools that are observing and interacting without a vote on issues, and even some for only the eight remaining schools — Baylor, Iowa State, Kansas, Kansas State, Oklahoma State, Texas Tech, TCU and West Virginia.

There will be no final decisions this week on future schedules — for football or other sports — and if the league would return to divisions.

The Big 12 became a 10-team league and scrapped divisions in 2011, during a two-year transition when Colorado, Missouri, Nebraska and Texas A&M left the league while TCU and West Virginia came in. Changes in NCAA legislation allowed the Big 12 in 2017 to resume its football championship game, pitting the top two teams in the standings after a round-robin league schedule.

“We’re still considering whether divisions are the right thing for us, or whether one group together is the right thing,” said Bowlsby, adding that could differ among sports.

As for NIL, which went into effect last summer with few guidelines, Lyons said there have been a lot of positives and negatives.

“So where do we end up somewhere in between, where our student-athletes can capitalize of name, image and likeness, but we’re not using them for pay-for-play, and we’re not using it for inducements,” Lyons said. “That’s the bad part right now ... some institutions are using it as recruiting inducements and making promises on the front end. And that was really never anticipated. It was a matter of once a student-athlete becomes a student-athlete, how he or she can capitalize off their name, image and likeness.”