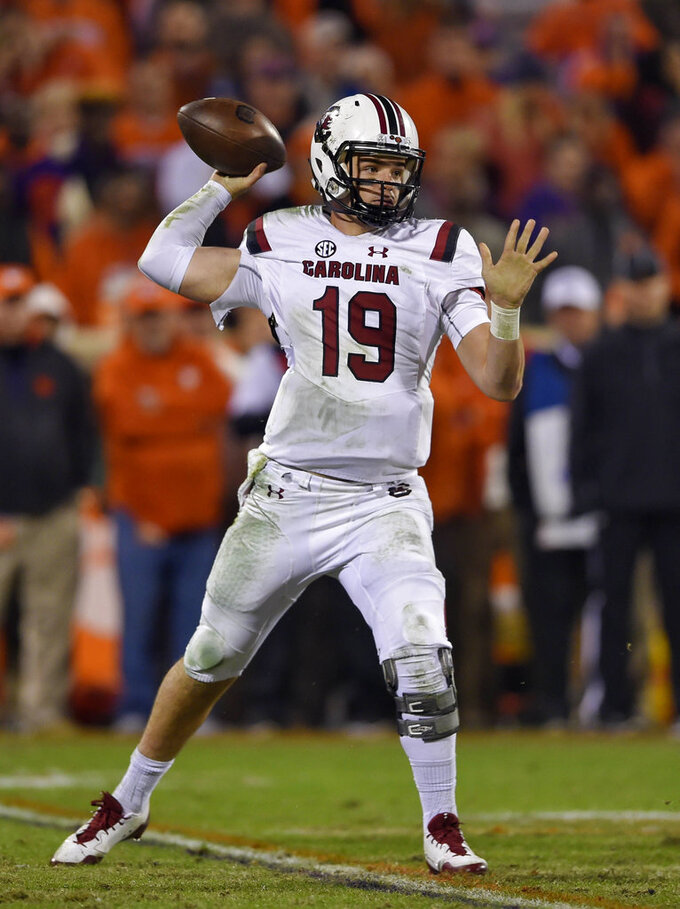 South Carolina quarterback Jake Bentley drops back to pass during the first half of an NCAA college football game against Clemson Saturday, Nov. 24, 2018, in Clemson, S.C. (AP Photo/Richard Shiro) 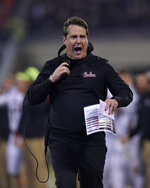 COLUMBIA, S.C. (AP) — South Carolina is treating its extra week of practice like a championship game rehearsal, even if there won't be any trophy awarded following its regular-season finale against Akron.

Tight end Kyle Markway said Gamecocks coaches have stressed to them that the goal for next year is Atlanta and the Southeastern Conference title game, a process that begins now as they prepare to play a makeup game due to a Sept. 15 contest with Marshall called off in the face of Hurricane Florence.

"We're usually not practicing this week," Markway said Tuesday. "Next year, we plan on being in Atlanta."

It's a message straight from South Carolina head coach Will Muschamp, who thought it a strong sign that this year's team went through two off weeks due to the storm and will practice during what is championship week for some programs.

The Gamecocks (6-5) have work to do before they're practicing for a championship, but for now their focus is on the Zips (4-7). Akron agreed to fill in for the Thundering Herd earlier this month.

The offense can continue building on its strong play the past few weeks as South Carolina has averaged better than 40 points and 519 yards a game the past month. The Gamecocks younger players get more time to develop with an eye to 2019. South Carolina can guarantee a second straight winning record and enhance its bowl prospects. And the players, Bentley said, won't have to sit around and stew about another loss to rival Clemson, this one 56-35 at Death Valley this past Saturday night.

"That's one thing I was thinking about, not having to wait a few weeks until we get bowl game (practice) started," Bentley said. "But I hope guys are able to transfer their mind (from Clemson) to this is the most important thing right now."

Not everyone has gotten past the defeat yet.

While left guard Zack Bailey liked the spirit and effort at practice, he wasn't sure the Gamecocks were enthusiastic about what happened despite playing the rival Tigers closer than some expected.

The game will also mark the final time at Williams-Brice Stadium for the program's seniors, who were officially honored as planned before a 49-9 win over Chattanooga on Nov. 17. Bentley, a junior, said it was a major goal this week to make sure the team closes out their careers in the right way.

Bentley, a junior who is second in the Southeastern Conference at 275 yards passing a game, had been talked about as an NFL prospect earlier in the season. His recent play has revived discussions of whether he'd give up his final season to go pro. Bentley is still undecided, although he said there are many things he and this team have not yet accomplished in the past three years.

Akron coach Terry Bowden said the school made the match when it looked like the Zips had a chance to reach a bowl game. Four straight defeats ended those chances, but the opportunity to play in a Power Five environment — Akron's season opener at Nebraska was cancelled due to bad weather and lightning — was the biggest enticement to play.

"It's something we all wanted," he said.

Muschamp is glad for a final opportunity to play and potentially use as a springboard for the bowl prep, into offseason workouts and beyond.

"Our goal is to go to Atlanta" for the SEC title game, Muschamp said. "If you go to Atlanta you're going to be practicing at this time next year. We need to get used to practicing this week."