Spotlight on Florida's Mullen could dim or intensify vs UGA 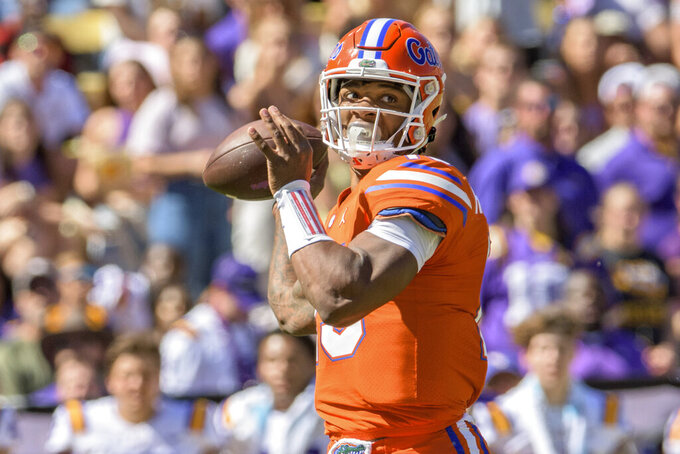 GAINESVILLE, Fla. (AP) — At best, Florida coach Dan Mullen is merely experiencing a down year. At worst, his team has plateaued and needs a leadership change.

The reality is probably somewhere in between.

Mullen has provided Florida with more downs than ups during the last two seasons, raising speculation about the direction of the program and Mullen’s long-term viability as its coach.

“I think we’re headed in a good way with the attitude of the program,” Mullen said during Florida’s bye week. “The kids here on the team have a great attitude, good focus. ... I’m pretty pleased with where the mindset of the guys with the team are right now.”

The Gators (4-3, 2-3 Southeastern Conference) have lost six of their last eight against Power Five opponents, including consecutive losses to what were supposed to be overmatched LSU teams. The first one last December started a three-game losing streak that eliminated the Gators from national championship contention. The second one last weekend, a 49-42 loss in which the Tigers ran for a staggering 321 yards, knocked Florida out of the Eastern Division race and left Mullen and defensive coordinator Todd Grantham in a glaring spotlight.

Mullen could have appeased at least part of the fan base by firing Grantham during the bye week and/or inserting dynamic quarterback Anthony Richardson into the starting lineup in place of turnover-prone Emory Jones. He did neither, although he still could turn to Richardson before the unranked Gators play top-ranked Georgia (7-0, 5-0) in nearby Jacksonville next Saturday.

“We’re really fortunate,” Mullen said. “We have two really good quarterbacks here. We’ve played them both in every game they’ve been healthy. I see us continuing down that path.”

Mullen's path has been filled with potholes lately. But the fourth-year Florida coach has company in an athletic department swirling with questions:

—Athletic director Scott Stricklin forced women’s basketball coach Cam Newbauer to resign in July, a decision that came amid allegations Newbauer created a toxic environment that included verbal abuse toward players, assistants and staff members. Stricklin’s biggest failure may have been responding to initial complaints about Newbauer during his first season (2017) by investigating internally.

—Men’s basketball coach Mike White is 16-18 in March, failing to get Florida past the NCAA Tournament’s second round in each of the last three postseason trips.

—Florida’s baseball team is 30-30 in SEC play its last two full seasons under coach Kevin O’Sullivan, a significant drop-off for a program that advanced to the College World Series seven times in nine years and won the 2017 national championship. With O’Sullivan widely considered the leading candidate for the LSU job, the Gators dropped their final three games by a combined score of 28-4. He ended up staying in Gainesville.

Football, though, drives the entire department. And Mullen is paid handsomely to make it hum.

It’s sputtering at the moment, though, and Mullen’s continued recruiting woes seem to be a root cause. Top recruit Shemar James, a four-star linebacker from Mobile, Alabama, bailed on the Gators this week. His decision dropped Mullen’s 2022 class to 24th in the nation, according to Rivals, and sixth in the SEC.

Mullen has proven to be one of college football’s most stubborn coaches, resisting change and probably showing too much loyalty at times. His strong-willed ways landed him in hot water last year after he doubled down on wanting to pack Florida Field during a pandemic.

He also got Florida on NCAA probation for the first time in 30 years, was dealt a show-cause penalty for recruiting violations, was fined and reprimanded by the SEC for his role in a benches-clearing fight, and was widely criticized for tone-deaf comments following two losses.

His failure to publicly take ownership of losses carried into this season and was at the forefront following a 20-13 stunner at Kentucky earlier this month. Asked whether he was outcoached, Mullen started reeling off numbers from the stat sheet.

Despite Mullen’s many missteps, Stricklin gave him a raise and a three-year contract extension in May. The 49-year-old Mullen is making $7.6 million this year, up from $6.07 million in 2020, and is under contract through 2026.

Mullen’s buyout is $12 million. Parting ways is unlikely, especially with a $85 million football facility opening next spring, a $250 million Swamp upgrade on the horizon and Mullen’s 33-12 record that includes a 21-10 mark in SEC play.

“He brings a lot to the table.”

Mullen hasn’t brought much lately, and all the talk about his job security could ease up or ramp up depending on how next Saturday’s game goes against the Bulldogs.

“I think leadership continuity is very important to every organization,” Stricklin said. “I want Dan to be here as long as he wants to coach in college football. I don’t think he’ll ever coach anywhere else. I can’t predict the future, but I don’t see him coaching any other university.”