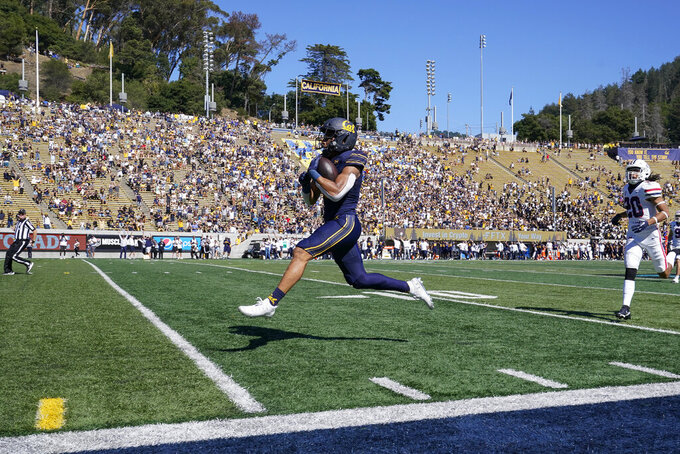 California running back Jaydn Ott, left, runs the ball for a 73-yard touchdown against Arizona during the first half of an NCAA college football game in Berkeley, Calif., Saturday, Sept. 24, 2022. (AP Photo/Godofredo A. Vásquez)

California freshman Jaydn Ott turned in the best rushing performance of the season with 274 yards and three touchdowns on just 19 carries against Arizona.

It was the sixth 200-yard rushing game in the Bowl Subdivision this season and Cal's top rushing total since Jahvid Best had 311 yards against Washington in 2008.

Southern California is the fourth team since at least 2012 to not commit a turnover through its first four games, according to Sportradar.

The Trojans have run 269 offensive plays and returned five kicks and three punts over four games without a fumble or interception.

Michigan went turnover-free through four games last year. Alabama did it in 2017 and Western Michigan in 2016.

Old Dominion linebacker Jason Henderson tied for the second-most tackles in three seasons in the FBS with 21 against Arkansas State.

Henderson had made 18 against Virginia Tech in the Monarchs' season opener, which had been tied for the national season high. His total of 64 in four games is most in the country.

Notre Dame's 35 first downs against North Carolina were the Irish's most since they had 36 against Army in 1974. The breakdown: 17 by rushing, 12 by passing and six by penalty.

Western Kentucky's 73-0 win over Florida International was the biggest margin of victory in a game matching FBS teams since Michigan rolled Rutgers 78-0 on Oct. 8, 2016.

Ohio State set the national season high for points in its 77-21 win over Toledo on Sept. 17.

Illinois' Chase Brown remains the national rushing leader at 151 yards per game after running for a season-low 108 against Chattanooga, and Washington's Michael Penix Jr. is first in passing yards at 347 per game, a half yard ahead of Mississippi State's Will Rogers. SMU's Rashee Rice tops the receiving chart at 141.3 yards per game.