Syracuse, MEAC agree to 10-year partnership on and off field 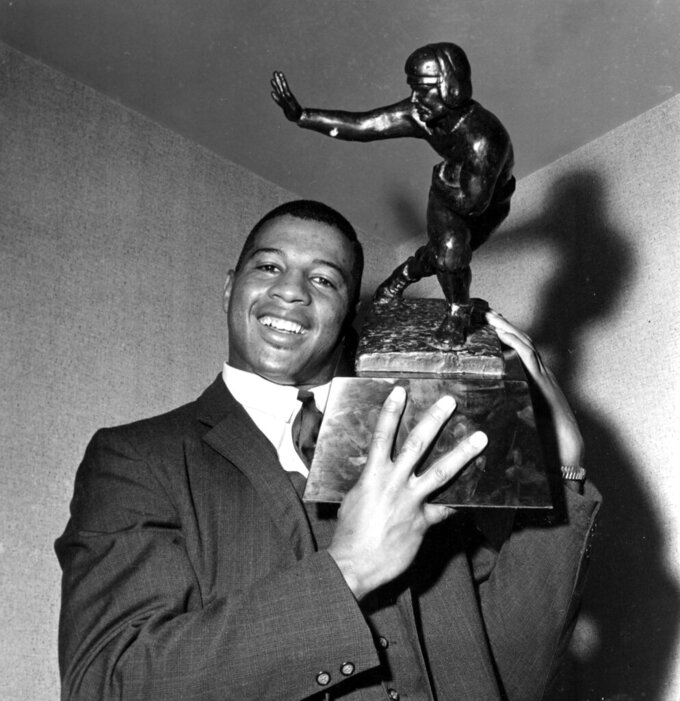 FILE - Ernie Davis, halfback for Syracuse, holds the Heisman Trophy prior to official presentation to him in New York City, in this Dec. 6, 1961, file photo. Syracuse was one of the standard-bearers in terms of accepting athletes based on performance and ability. Its history includes: Wilmeth Sidat-Singh, a quarterback and the first star Black athlete at the school in the 1930s; Bernie Custis, who quarterbacked the Orange from 1948-50 and became the first Black professional quarterback in the modern era with the Hamilton Tiger-Cats of the Canadian Football League; Jim Brown, regarded by many as the greatest running back of all time, starred at Syracuse in the mid-1950s and has dedicated much of his life to issues of social justice; and former Orange tailback Ernie Davis, the first Black to win the Heisman Trophy (1961). (AP Photo/File)

In the dead of winter Syracuse athletic director John Wildhack was brainstorming about the future and how to make some sort of social impact through sports.

"My thought was, is there a chance for us to maybe schedule our nonconference with a little more purpose in some instances?” Wildhack said.

That was in February and Wildhack, a former executive at ESPN, immediately thought of Dennis Thomas, commissioner of the Mid-Eastern Athletic Conference, a group of historically Black colleges and universities in the Southeast and Mid-Atlantic. Wildhack floated the idea of an alliance with the MEAC that would include athletic competition, seminars on athletic compliance and fundraising, visiting professorships and an internship exchange.

“We both agreed that it shouldn’t be about just games," said Thomas, who is retiring at the end of the year but plans to stay involved. "It should be about professional development. It should be about internships. It should be about sharing expertise, all those kinds of things that we think are a great convergence and synergy for our institutions and Syracuse University.”

The agreement was announced Thursday. The first game in the partnership features the Syracuse women’s basketball team hosting Morgan State in November. A contract also has been signed for Syracuse to play Morgan State in football in 2029. The goal is to schedule up to 50 contests involving several sports.

“I’m thrilled that this idea has become reality," Wildhack said. "Sports has always been one of the avenues to unify people. In some small way I hope that’s one of the outcomes of this.”

“I want our student-athletes who are going to compete against MEAC schools to learn about those schools, about HBCUs and the importance they play in higher education,” Wildhack said. “I want that to be a part of their experience here at Syracuse.”

The agreement comes as HBCUs have seen an influx of former professional athletes into their coaching ranks. “Prime Time” Deion Sanders, a Pro Football Hall of Famer, is the football coach at Jackson State at age 54; former Ohio State star and 1995 Heisman Trophy winner Eddie George is at Tennessee State; and Mo Williams, an NBA All-Star in his playing days, begins his second season as men’s basketball coach at Alabama State.

“I look at this as just kind of the start of this relationship, and I think it will lead to more areas where we can collaborate," Wildhack said. “The history of the HBCUs is a very, very important element of higher education in the United States. We’ve got a long, distinguished history at the university in terms of integration. Hopefully, this is an extension of that.”

Syracuse has had an array of Black football players who excelled while coping with the endemic racism of American society. The list includes Wilmeth Sidat-Singh, a quarterback and the first star Black athlete at the school in the 1930s; Bernie Custis, who quarterbacked the Orange from 1948-50 and became the first Black professional quarterback in the modern era, playing for the Hamilton Tiger-Cats of the Canadian Football League; Jim Brown, regarded as one of the greatest football players of all time, who starred at Syracuse in the mid-1950s and has been praised for his leadership in the African-American community; and former Orange tailback Ernie Davis, the first Black player to win the Heisman Trophy (1961).

The university's history also includes the so-called Syracuse 8, a group of nine players on the football team who boycotted the 1970 season because of a lack of diversity on the coaching staff, academic slights and other forms of discrimination.

Thomas is hopeful the alliance will provide a blueprint for other schools to consider.

“We think it’s warranted because we really want to not only make this work but have an impact on society," he said. "We think this could be a model that others could follow.