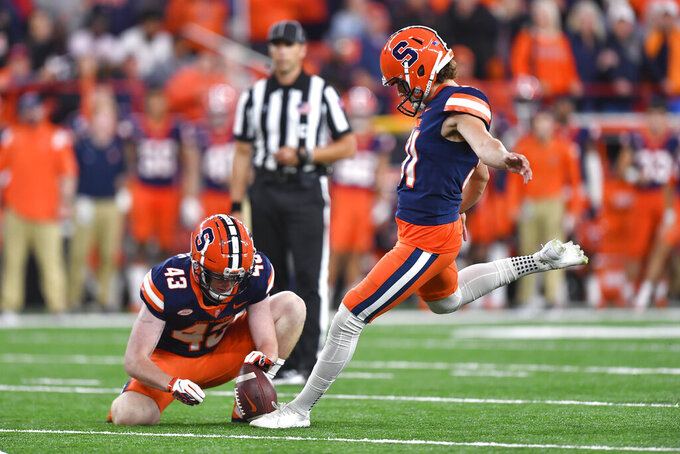 Syracuse's Andre Szmyt, right, kicks the go-ahead field goal from the hold of defensive back Cornell Perry (43) during the second half of the team's NCAA college football game against Virginia on Friday, Sept. 23, 2022, in Syracuse, N.Y. Syracuse won 22-20. (AP Photo/Adrian Kraus)

SYRACUSE, N.Y. (AP) — Syracuse place-kicker Andre Szmyt decided last December that he wasn't going to return for his final year of eligibility. He was ready to move on after a subpar year, his remarkable success three years earlier a distant memory.

“It was frustrating. It was hard to get things going last year," said Szmyt, who was crowned the best kicker in the nation in 2018 when he won the Lou Groza Award. “Just things weren’t clicking.”

Two days later, Szmyt abruptly changed his mind. The reason? Orange coach Dino Babers hired Bob Ligashesky to coach special teams. Chats with family and Ligashesky was all it took for a change of heart.

“I liked what he had to offer and what he said," said the 6-foot-1, 200-pound Szmyt, a walk-on as a freshman in 2017 after just one year of high school football in the suburbs of Chicago. "I figured why not come back and learn from him, all he has to offer, see how things go from there.”

Syracuse didn't replace coordinator Justin Lustig after he left the program in January 2021 for Vanderbilt, taking with him the expertise that had given the Orange one of the top special teams units in the country. Last season, Syracuse's special teams were coached by committee and Szmyt slumped, making just nine of 14 field goal attempts.

In his breakout season he was a unanimous All-American and made an Atlantic Coast Conference-record 30 field goals (in 34 tries), including all three attempted from 50 yards and beyond. He became the second kicker to lead the Bowl Subdivision in scoring (11.6 ppg), falling one field goal shy of matching the national record set in 2003 by Georgia's Billy Bennett.

“It (last year) was kind of complicated because we didn’t have a certain guy who would be working with us at practice or even watching film," Szmyt said. “I felt like I needed a coach who could kind of direct me in the right way if things weren’t going as planned and I didn’t really have that. Now that we have someone, it’s really helpful.”

Szmyt, who also handles kickoffs, is nine of 10 on field goals this season, including another 50-yarder. His lone miss was a 41-yard attempt against Purdue in a game the Orange won 32-29 on their final offensive play. And because of his right leg, the surprising Orange remain unbeaten after four games. Szmyt matched a school record and set a personal high last Friday night with five field goals against Virginia, including the 31-yard game-winner with 74 seconds left to finish a 22-20 victory with 16 points.

That boosted his season total to 41 points, three behind the nation's top three kickers in scoring. Jack Podlesny of top-ranked Georgia, Matthew Dennis of No. 22 Wake Forest, and Bert Auburn of Texas each have 44 points. For his career, Szmyt is 74 of 89 (83.15%) on field goals and 173 of 177 on extra points for 395 points.

"It's different now," Szmyt said. "We kind of have that game-like feeling in practice so that we feel the pressure in practice as well as when we get in the games.”

It's different, all right. Against the Cavaliers, cornerback Justin Barron, Szmyt's regular holder, was ejected for targeting early in the third quarter and backup holder Mike Midkiff stepped in. The Orange didn't skip a beat, even with a high snap on the winning kick.

“His focus, really, especially from last year, (is different)," Barron said. "Coach Leg has him do a lot of stuff in practice compared to previous years. When they’re doing their little drills on their own, now Leg’s with them all practice. It’s real cool to see him focused.”

The stumbles of last season on a team that finished 5-7 after losing its final three games seem long forgotten. That 48-yard miss in the final minute of regulation in a three-point home loss to Clemson doesn't even register. Nor does the fourth-quarter miss from 45 yards against Wake Forest in a game the Demon Deacons won in overtime.

Added Szmyt: “All I know is I’ve got to go out there and I’ve gotta help my team any way I can. I’ve just got to be able to do what I have to do.”