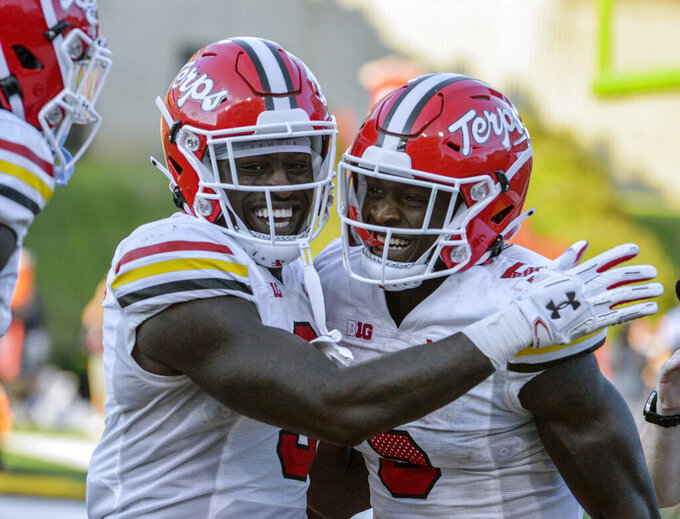 COLLEGE PARK, Md. (AP) — As Taulia Tagovailoa tries to grow as a quarterback, a big part of the maturing process takes place off the field.

“This year I'm eating all three meals,” he said. “I've got to gain weight. I think what I eat is more healthy for me. ... My sleep got way better from last year too.”

Tagovailoa looked prepared for his second season as Maryland's starter when he led the Terrapins past West Virginia in their opener last weekend. Now the Terps host Howard of the FCS on Saturday night in a game they'll be expected to win easily.

That doesn't mean this has been an easy week.

“There are still a lot of things on film after watching that needs to be corrected,” coach Michael Locksley said. “It's always good to be able to correct things after a win.”

Locksley is hoping for significant improvement between the first and second games. This weekend may not provide much of a challenge, but the Terps need to stay sharp. This is their last game before they start Big Ten play at Illinois on Sept. 17.

Tagovailoa threw for 332 yards and three touchdowns in Maryland's 30-24 win last weekend. Two Terrapins — Dontay Demus and Rakim Jarrett — went over 100 yards receiving, and each had a TD of at least 60 yards.

Maryland returned a lot of its production from last year's abbreviated season, and it showed. The Terps were impressive offensively at the start. They were held without a first down in the third quarter, but they were able to rebound from that in the fourth.

“I thought our guys played really hard,” Locksley said. “The playmakers on our team made the plays that needed to be made when the game was on the line.”

Maryland did have a significant injury to announce this week: Locksley said Tuesday that linebacker Fa’Najae Gotay had an upper-body injury that required surgery.

Howard opened the season with a 38-14 loss at Richmond last weekend. Quinton Williams passed for 226 yards and a touchdown in defeat. Jarett Hunter added 93 yards on 12 carries for the Bison.

“We've got to shore up our kickoff coverage unit, obviously,” Locksley said.

Maryland's Tayon Fleet-Davis rushed for 123 yards against West Virginia, but 53 of those were on one play. Even with that big gain, the Terps averaged only 3.7 yards per rush.

Maryland struggled on third down for much of the game, although that improved toward the end. The Terps finished 8 of 20 on third down, and their average distance to go was a manageable 4.9 yards.

Maryland was certainly committed to establishing the run alongside Tagovailoa's passing.

“I think the most encouraging thing was probably our o-line and our running game,” Tagovailoa said. “We're showing the balance — that we can do both against a good team like West Virginia.”

Maryland forced four turnovers last weekend and didn't commit any. It was the first time the team was plus-four in that department since Sept. 17, 2016 against Central Florida.

The Terps have won the last eight times they didn't lose a turnover.