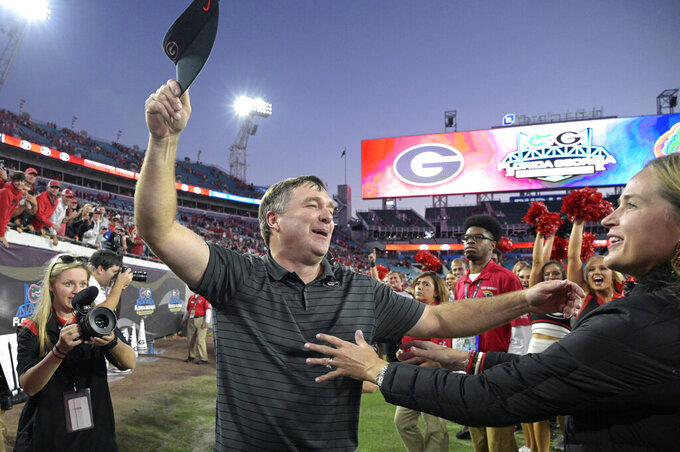 Alabama and Georgia are competing for the honor of having the nation’s top-ranked recruiting class at the same time they are preparing for their respective College Football Playoff semifinals.

But there’s a third Southeastern Conference program that is assembling an equally impressive recruiting class without ever having earned a playoff berth.

Texas A&M has joined its SEC rivals atop the team recruiting rankings heading into Wednesday, the first day that high school senior prospects can finalize their college plans. The race is close enough that the unofficial team recruiting champion might not be determined until the later signing date on Feb. 2.

“Alabama’s finished No. 1 nine of the last 11 years,” said Steve Wiltfong, the national recruiting director for 247Sports. “Texas A&M has really come on here. Georgia’s got a great class. Those three are kind of duking it out.”

Alabama is currently first, Georgia second and Texas A&M third according to composite rankings of recruiting sites compiled by 247Sports.

Although Texas A&M owns a somewhat disappointing 8-4 record this season and hasn’t won a national title since 1939, the Aggies have made progress under Jimbo Fisher. The Aggies are 34-14 in Fisher’s four seasons, including a 9-1 mark and Orange Bowl win last season.

Texas A&M could face some challenges maintaining its recruiting momentum after losing defensive coordinator Mike Elko, who is taking over as Duke’s head coach. But in a season that’s been noteworthy for all its coaching upheaval, Texas A&M may be benefiting from its relative stability.

Fisher is the longest-tenured head coach of any Power Five school in the state of Texas.

“It’s just one of those programs that everybody feels is right on the verge of making something really big happen, and a lot of kids are attracted to that,” said Adam Gorney, national recruiting director for Rivals. “Alabama’s going to get theirs. Georgia’s going to get theirs. But now Texas A&M is sort of right in that upper echelon of being able to recruit at that level.”

The 28 head coaching changes in the Football Bowl Subdivision rankings have impacted plenty of recruiting classes over the last couple of weeks.

Gorney believes the uncertainty stemming from so many coaching changes could cause more verbally committed players than usual to change their minds and sign elsewhere. He noted the difference between this recruiting cycle and the last one, when pandemic-related restrictions prevented prospects from traveling to prospective schools for an extended period.

“It felt like last recruiting cycle, kids just wanted a spot and wanted it locked in,” Gorney said.

Not this year. Now that prospects are taking more visits and teams are making more coaching changes, recruits might not be as likely to stick to their verbal commitments.

It's not just the head coaching changes that can impact prospects' decisions.

Swinney now faces the challenge of keeping as much of Clemson's class together as possible this week. Three top-100 defensive recruits from IMG Academy (cornerback Daylen Everette, edge rusher Jihaad Campbell and safety Keon Sabb) all withdrew verbal commitments to Clemson and re-opened their recruitments after Venables' departure.

SEC teams once again are dominating on the recruiting trail.

While the 247Sports Composite team recruiting rankings should fluctuate quite a bit over the course of the week, SEC schools had eight of the top 18 classes as of Tuesday morning.