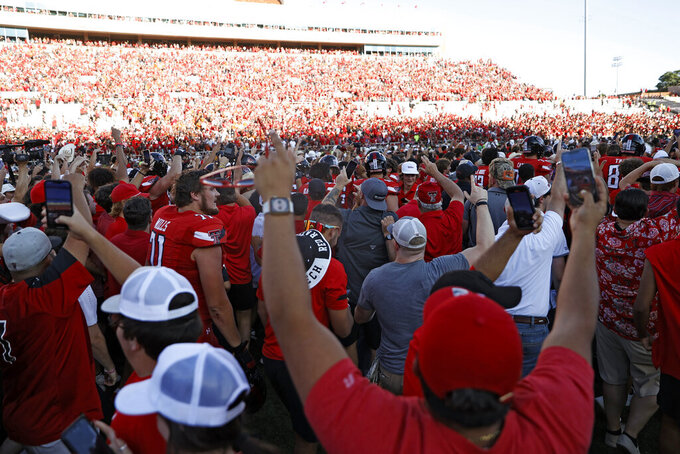 IRVING, Texas (AP) — Texas Tech was fined $50,000 and reprimanded Monday by the Big 12 Conference because fans stormed the field following an overtime victory against rival Texas, a celebration during which a video showed one of them shoving a Longhorns player.

A post on Texas Tech's official athletic department Twitter account included a still shot from the video asking for help in identifying that fan, and said the matter had been turned over to the school's police department.

“Texas Tech does not condone any physical altercations between spectators and student-athletes. This behavior has no place at Texas Tech athletic events,” the school said in a statement.

The video showed Texas senior edge rusher Ovie Oghoufo being shoved from behind by one of the fans who ran onto the field Saturday after the Red Raiders’ game-ending field goal for a 37-34 win, their first at home in the series since 2008.

“I wouldn’t call the fan running into our player. I think the fan went and knocked our player down,” Texas coach Steve Sarkisian said Monday. “Those are tough situations. I love the pageantry of college football. When fans rush the field, it’s dangerous for us as coaches on both sides. It’s dangerous for the players. I give Ovie a lot of credit. I thought he showed great poise and composure. I thought it could have turned into an ugly situation."

Sarkisian said he didn't blame fans for rushing the field to celebrate a victory like that, but said it would be good to find a better and safer way for everybody involved. He also acknowledged significant fines some conferences have to try to eliminate such situations.

Texas Tech was fined and publicly reprimanded in accordance to Big 12 policy regarding standards of sportsmanship.

“We have a duty to provide a safe game environment,” Big 12 Conference Commissioner Brett Yormark said. “The Texas Tech Department of Athletics has a written event management policy that, while well thought out, was unsuccessful in ensuring the safety and security of all visiting team student-athletes, officials, coaches and staff. There is zero tolerance for any act that compromises the safety of game participants."