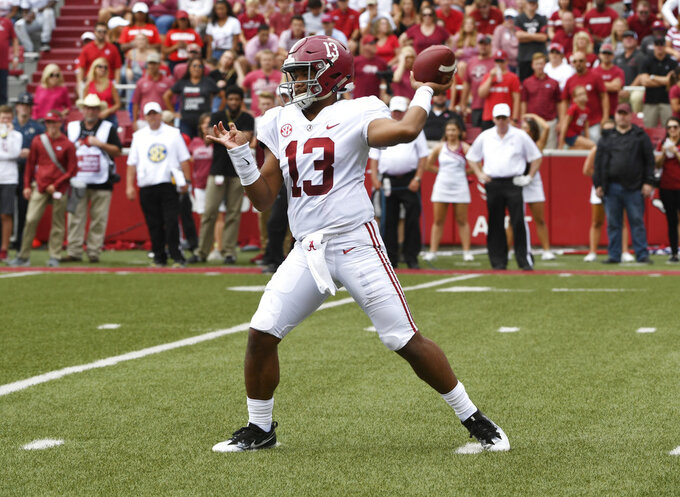 Alabama quarterback Tua Tagovailoa drops back to pass against Arkansas in the first half of an NCAA college football game Saturday, Oct. 6, 2018, in Fayetteville, Ark. (AP Photo/Michael Woods)

TUSCALOOSA, Ala. (AP) — It's the Southeastern Conference's top young gun versus the elder statesman.

It's an intriguing matchup of talented quarterbacks in a game where the so far unchallenged Crimson Tide (6-0, 3-0 SEC) is favored by four touchdowns.

Lock is the reigning All-SEC passer with 10,000-plus career yards for the Tigers (3-2, 0-2). But when Alabama coach Nick Saban sings his praises, he could just as easily be talking about Tagovailoa.

"He's got to be one of the top quarterbacks in the country," Saban said. "He's athletic enough to make plays with his feet or pull the ball every now and then and run it. I think he's a smart player. I think he does a good job of executing his offense. I think they've got some really good skill guys on offense and they've got a really good scheme, and he does a great job of executing it. He's a very, very talented guy.

"I don't know how many quarterbacks are better than him in the country, but he's got to be one of the best. He's got to be right up there at the top."

Lock is coming off subpar performances in losses to South Carolina and No. 2 Georgia. He completed less than half his passes in both games with three interceptions and no touchdowns.

Tagovailoa is leading the nation in passing efficiency and has emerged as possibly the Heisman Trophy front-runner.

Saban said Tagovailoa has a sprained knee and wore a protective brace but wasn't limited in practice during the week "so that's not an issue."

Alabama will face Lock without starting cornerback Trevon Diggs , who broke his foot in the Mississippi State game and may be out for the season.

It's especially challenging timing with Lock coming to Bryant-Denny Stadium after Arkansas scored 31 points against the Tide.

"They have a prolific offense," Tide safety Deionte Thompson said. "Drew Lock is hands down one of the best quarterbacks in the nation, if not the best. The way that he can get the ball out of his hands is very fast. The way they move, they average a play every six seconds after the ball is snapped."

Here are some other things to watch in the Missouri-Alabama game:

Missouri has already given No. 2 Georgia a competitive game. The Tigers lost 43-29 but the Bulldogs scored on a fumble return and blocked punt.

Alabama has twice scored on its first offensive plays of the game and has racked up multiple touchdowns in the first quarter in all six games.

"We need to try and do the same thing, whether we start out on offense or defense, to withstand the first punch, so to speak," Odom said. "We've got to be ready and prepared to go do that."

This is generally Alabama's calling card, but Missouri has been even better at shutting down opposing runners. The Tigers rank second in the SEC and 15th nationally in run defense, allowing just 107.4 yards per game.

Missouri's Tucker McCann is coming off a 5-of-6 field goal performance against South Carolina, including a 57-yarder with 1:18 left. He leads the league in scoring. Alabama has already missed four point after attempts and Joseph Bulovas is 5 of 8 on field goals since taking over the starting job.

Missouri is coming off a 37-35 loss to South Carolina on a last-second field goal by Parker White. The Tigers have also been in another tight game, beating Purdue 40-37.