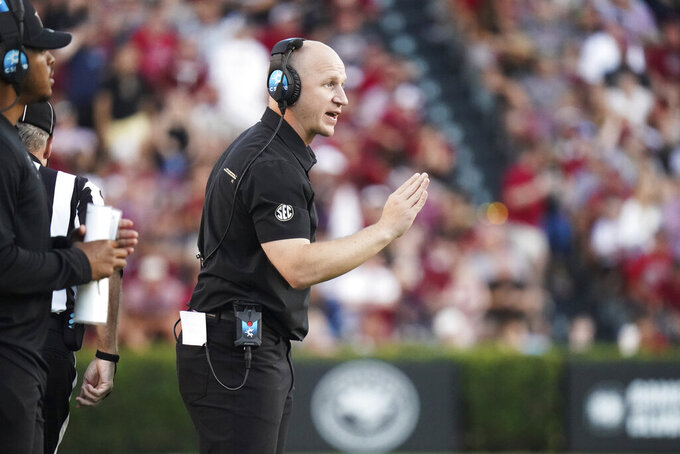 Vanderbilt head coach Clark Lea communicates from the sideline during the second half of an NCAA college football game against South Carolina, Saturday, Oct. 16, 2021, in Columbia, S.C. (AP Photo/Sean Rayford)

NASHVILLE, Tenn. (AP) — The Vanderbilt Commodores are back home with the chance to show much they've learned from a missed opportunity.

The Commodores blew a lead in the final minute with a chance to hand first-year coach Clark Lea his first Southeastern Conference victory. Instead, they lost 21-20 to South Carolina, putting their SEC skid at 16 straight heading into Saturday's game with Mississippi State.

“It’s a situation that we want to be better in, that we have to be better in if we’re going to be a one-possession team in the fourth quarter playing in tight games," Lea said. “That’s got to be where we thrive.”

This is the first of a three-game home stand for Vanderbilt (2-4, 0-2). The Commodores also have an open date in two weeks trying to

Mississippi State (3-3, 1-2) is coming off a 49-9 loss to No. 4 Alabama. While up-tempo, high-powered offenses like Ole Miss and Tennessee are among the nation's fastest and highest-scoring, Leach's Air Raid offense is averaging 24.7 points a game in his second season.

Mississippi State quarterback Will Rogers looks to begin new streaks after Alabama halted several impressive runs last week. A first-quarter interception was his first after 115 attempts as the sophomore tossed three against the Tide. His 11-game run with at least one touchdown pass also came to an end, with Alabama shutting him out again.

Rogers remains the SEC’s top passer averaging 360.3 yards per game after throwing for 300 against Alabama.

“He's got a ways to go before he's able to take the starting share of reps and so want to build confidence around a plan with Mike this week and allow Ken the time to get healthy,” Lea said.

Wright made the first start of his career last week at South Carolina, and the sophomore was 11 of 21 for 206 yards and a touchdown pass. Wright had Vanderbilt's three longest plays this season, completing passes of 44, 50 and 52 yards for an offense that didn't have one play of 40 yards or longer.

He also rallied Vanderbilt from an 11-point deficit to a 20-14 lead.

Since holding North Carolina State, Memphis and LSU below 100 yards each, the Bulldogs have allowed 162 to Texas A&M and a season-high 195 to Alabama. They rank third in SEC run defense at 106.7 yards allowed per game but hope to right things against Vanderbilt.

One thing the Commodores are doing well this season under Lea, who was defensive coordinator at Notre Dame the previous three seasons, is coming up with turnovers. They have intercepted at least two passes in three games this season for the first time since 2018.

Vanderbilt had four takeaways against South Carolina last week, most by the defense since having four against Nevada in 2018.

This is Mississippi State's first game in Nashville since 2009, and Vanderbilt hasn't beaten the Bulldogs since 2004. The Bulldogs have outscored Vanderbilt 107-34 since that loss having won four straight. They also lead the series 14-7-2.