Will Levis, No. 7 Kentucky visit No. 14 Mississippi 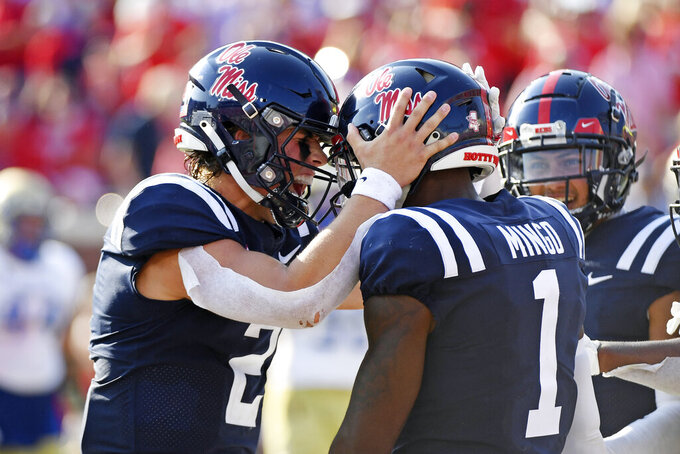 Mississippi quarterback Jaxson Dart (2) and wide receiver Jonathan Mingo (1) react after a touchdown catch by Mingo during the first half of an NCAA college football game against Tulsa in Oxford, Miss., Saturday, Sept. 24, 2022. (AP Photo/Thomas Graning)

Line: Ole Miss by 6 1/2, according to FanDuel Sportsbook.

Fast starts have both teams nursing hopes of challenging for division contention, but there's hardly any margin for error behind No. 1 Georgia and No. 2 Alabama. Kentucky and Ole Miss are coming off 10-win seasons and the programs don't seem to be slowing down. The Wildcats have already proven themselves with a victory over then-No. 12 Florida. The Rebels are seeking their first big win of the season.

Kentucky WR Tayvion Robinson. The Virginia Tech transfer is coming off a career game highlighted by seven catches for 147 yards with touchdowns of 69 and 40 yards to beat Northern Illinois. He ranks second among SEC receivers with 87.25 yards per contest and third with 349 yards overall.

Ole Miss: Judkins. The Rebels freshman has been a formidable weapon alongside the much-hyped TCU transfer Evans. Judkins is second in the country forcing 33 missed tackles. The backfield duo are one of two teammates averaging 90-plus rushing yards per game. Evans left the Tulsa game with an unspecified medical issue.

It's the first time these teams have met when both were ranked since 1958. ... Kentucky is going for two streaks the team hasn't managed since 1977: a third straight win over a ranked opponent and a ninth straight victory. ... Ole Miss, Georgia, Alabama and Minnesota are the only FBS teams averaging 40-plus points a game and allowing 10 or fewer. ... The Rebels have had at least one player reach 100 rushing yards in four straight games for the first time since 1999.