AP Top 25 will roll on in unusual college football season 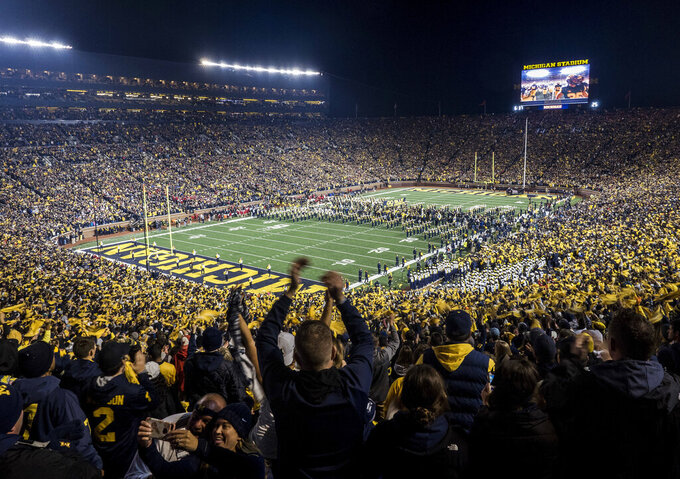 FILE - Fans cheer as the Michigan team takes the field at Michigan Stadium for an NCAA college football game against Wisconsin in Ann Arbor, Mich., Oct. 13, 2018. Michigan's Big House will be sitting empty when the leaves start to change this fall. From Ann Arbor to Los Angeles to Oxford, that most American of pursuits, college football, has either given up hope of getting in a traditional season or is flinging what amounts to a Hail Mary pass in a desperate attempt to hang on in the age of COVID-19. (AP Photo/Tony Ding, File)

A most unusual season is less than a month away and the preseason AP Top 25 presented by Regions Bank is scheduled to be released Aug. 24, marking the 85th year of its existence. The AP will also release its preseason All-America team the following day.

The AP has asked its voters to consider all Division I teams when filling out their ballots, so the preseason poll is expected to include teams from conferences that have decided not to play this fall. After games begin, voters will rank only teams that are scheduled to play.

“The preseason poll has always been a speculative ranking of teams based on last year’s results and knowledge about the new makeup of teams,” said Michael Giarrusso, AP's global sports editor. “This year, we think it is crucial to give all the teams and all their fans a snapshot look at what the Top 25 would have been to open the season.”

The pandemic has already gutted a significant portion of the season. Two major conferences, the Big Ten and Pac-12, have called off fall sports. For now, 67 out of 130 Bowl Subdivision teams, including those from the ACC, Big 12 and SEC, are still planning a fall football season. The AP panel of 62 sports writers and broadcasters will vote accordingly.

The AP provides guidelines to voters that are both broad and brief, understanding the task is more art than science, especially early in a season. The first sentence of those guidelines: “Base your vote on performance, not reputation.”

“The AP will collect and distribute the votes of our media panel as we always have,” Giarrusso said. “Once games kick off, it does not make sense to rank teams that are not participating. There is no solution that will satisfy every fan or every team. But ranking teams that play is the one that makes the most sense.”

If a spring season is also played, the AP plans to rank teams then as well.

“The AP and our voters have no idea what a spring football season will look like. But we are open to adapting and finding a way for our Top 25 voters to be involved in ranking teams if real games are played in the spring of 2021," Giarrusso said.

The AP All-America team will be conducted in a similar manner. All players, even those who have opted out of the season, are eligible for inclusion in the preseason team.

At the end of the fall season, only those who have played will be eligible for postseason honors, including the AP Player of the Year and Coach of the Year awards, also presented by Regions Bank. If a spring season is played, the AP will consider naming an All-America team afterward.