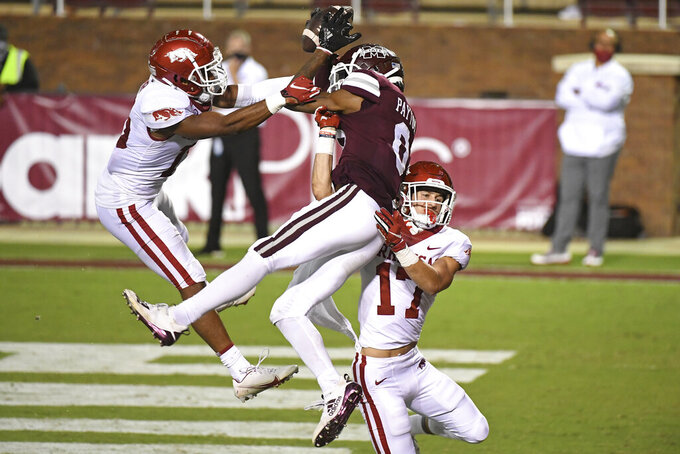 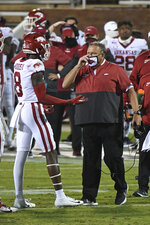 STARKVILLE, Miss. (AP) — Two coaches and almost three years since Arkansas last won a Southeastern Conference game, the Razorbacks took down the team that was the talk of college football last week.

“The mood in the locker room was probably everything you might expect,” first-year Arkansas Sam Pittman said. “The kids have gone for a long time without having an opportunity to win. And against a team, I mean, that’s a ranked football team and for us to come in here their place and win, the guys are ecstatic.”

A week after a record-breaking and stunning upset against LSU, the Bulldogs (1-1) and new coach Mike Leach hardly looked like the same team. Costello was 43 of 59 for 313 yards and one touchdown.

“I didn’t think we read the field very well,” Leach said. “Most of our problems out there – offense, defense, special teams – were because our eyes just weren’t in the right place. We’re not experienced enough or talented enough for that.”

Costello and the Air Raid shredded LSU for a Southeastern Conference record 623 yards passing, but the Bulldogs turned the ball over on downs in the red zone twice in the fourth quarter and also lost a fumble against Arkansas. They were 6-of-17 on third down.

“There’s so much momentum to be had that we didn’t seize, regardless of the coverage,” Costello said. “I mean, we completed the ball all over the field, but we’ve got to finish in critical situations. And I’ve got to take care of the football, bottom line.”

Kylin Hill, the Bulldogs’ leading rusher from a season ago, left the game after taking a hard hit in the first quarter and never returned.

Greg Brooks Jr. returned an interception 69 yards for a touchdown to put Arkansas (1-1) on top early and the Razorbacks led 14-7 at the half.

Arkansas managed only 275 yards of total offense and 24 minutes of possession. That turned out to be enough.

“It’s just a start,” Franks said. “It’s a great start. We’ll celebrate and then next week prepare to get another one. That’s the thing about the SEC. It’s not a one-week season. We’ll enjoy it, but we’ll get to work next week and try to get a win.”

Arkansas had not won an SEC game since beating Mississippi Oct. 28, 2017, under Bret Bielema. The past two seasons under Chad Morris the Razorbacks went winless in the SEC and then hired Pittman, a longtime offensive line coach, away from Georgia.

Arkansas: Defensive coordinator Barry Odom had gone up against Leach's Air Raid when both were in the Big 12. Unlike LSU, which played lots of man-to-man, Arkansas used plenty of zone defense. The Razorbacks allowed plenty of yards but made Mississippi State settle for small chunks.

Mississippi State: The loud voices of praise Leach will be quiet this week. Bulldogs fans have gone though the full Leach experience in two weeks, puling a stunning upset and tossing out a clunker as a favorite.

Mississippi State could be a one-week wonder.

Arkansas will travel to face Auburn next Saturday.

Mississippi State will head to Kentucky.