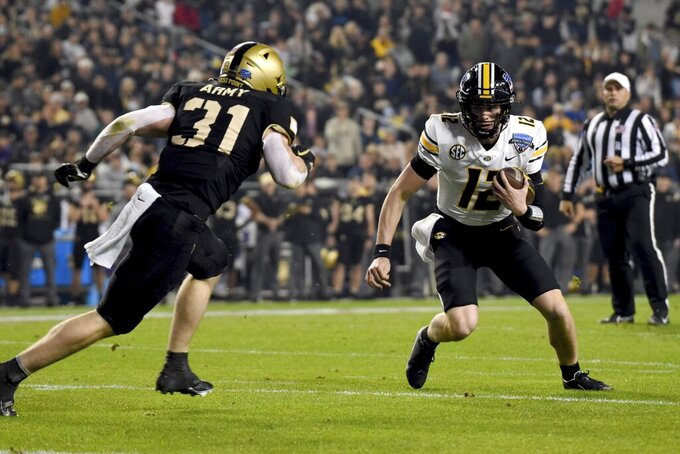 Army defensive back Leo Lowin (31) moves in to make the stop on Missouri quarterback Brady Cook (12) as he runs the ball in the first half of the Armed Forces Bowl NCAA college football game in Fort Worth, Texas, Wednesday, Dec. 22, 2021. (AP Photo/Emil Lippe)

After the Tigers took a 22-21 lead on a touchdown with 1:11 to play, third-string quarterback Jabari Laws led Army (9-4) downfield to the Missouri 24-yard line, setting up Talley’s game-winner.

Talley, who went to high school about 60 miles east of Fort Worth in Rockwall, Texas, said he was thinking about the brotherhood of Army football players when he went out for the final kick.

“We trust Cole,” Army coach Jeff Monken said. “What a great way for the team to end the season and these seniors to end their careers.”

One of those seniors was Laws, who was the Black Knights’ starting quarterback in 2019 before a knee injury sidelined him. He didn’t play at all last season following a second surgery.

Army backup quarterback Tyhier Tyler came on after starter Christian Anderson injured an ankle late in the third quarter and threw a 14-yard touchdown pass to Brandon Walters to give the Black Knights their first lead, 21-16. Anderson and JaKobi Buchanan scored on TD runs of 22 and 10 yards, respectively, for Army.

Redshirt freshman quarterback Brady Cook threw a 6-yard touchdown pass to Keke Chism with 71 seconds left to put the Tigers (6-7) ahead, but his two-point conversion pass sailed over the head of an open Dawson Downing in the end zone. Cook also ran for a 30-yard score in his first collegiate start.

“I did some good things,” Cook said. “Missed the throw when it mattered most.”

Missouri played without second-team All-America running back Tyler Badie, who was held out by coach Eliah Drinkwitz in advance of the NFL draft. Starting quarterback Connor Bazelak was sidelined because of a leg injury.

Buchanan led Army in rushing with 68 yards on 21 carries. Elijah Young was the Tigers’ top rusher with 75 yards on 13 carries.

In the second half, Missouri was stopped on downs at the Army 43 and lost a fumble by Downing at Army’s 48.

“Obviously in the second half the turnover was huge,” Drinkwitz said. “Disappointed for our team, especially our seniors. Just a difficult way to lose the game.”

Missouri: The Tigers were hampered going in by a short-handed secondary that then lost multiple players in the first half. Army threw one pass in the first half, good for 42 yards, and was 5 for 8 in the second half for 53 yards. The Black Knights entered 128th out of 130 FBS teams, averaging 94.8 yards passing per game.

Army: The Black Knights snapped a seven-game losing streak to Power Five teams with their first win since 2017. There were some close calls during the streak, including to Oklahoma (28-21) and Michigan (24-21).

Army senior linebacker Arik Smith was selected the game’s most valuable player with 12 tackles, 2½ for loss, and two sacks. Monken was impressed by Smith’s maturity as a recruit, learning on a home visit that Smith finished the family basement.

“Plumbing. Electrical. Finish work. All of it,” Monken recalled. “I mean, who does that?”

Missouri: After the Tigers open at Middle Tennessee State next season, they’ll host former conference rival Kansas State. The season finale against Arkansas will also be at Faurot Field.

Army: The Black Knights won’t face any Power Five teams next season for the first time since 2004 (except for the reworked 2020 schedule). The first two games will be against Group of Five heavyweights Coastal Carolina and UTSA, and the Army-Navy game will return to Philadelphia.