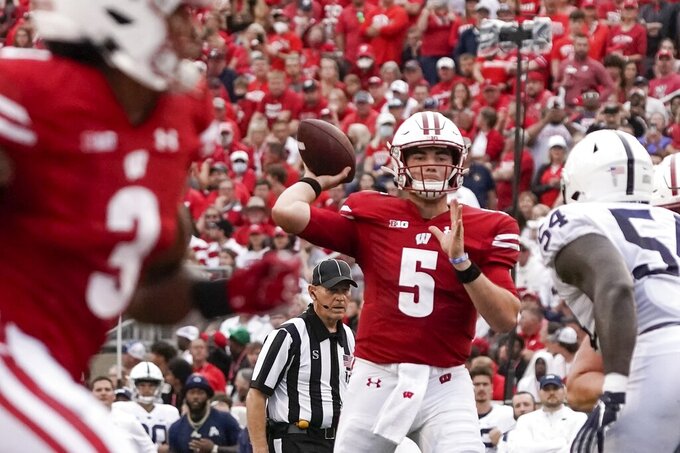 MADISON, Wis. (AP) — Wisconsin quarterback Graham Mertz wants to make sure he doesn’t let his struggles in a season-opening loss impact the rest of his year.

Mertz threw two interceptions in the final 2½ minutes as the 12th-ranked Badgers failed to convert numerous scoring opportunities and fell 16-10 to No. 19 Penn State. He spent the rest of his weekend breaking down game film and is ready to move forward, starting with Saturday night’s game against Eastern Michigan (1-0).

“There’s a lot of games ahead and we know what we’re going to do with them,” Mertz said Monday. “Take advantage of every rep in practice and every game we get, and have fun doing it. For us, nothing’s changed. We’re still rolling.”

Wisconsin could be rolling several spots down the AP Top 25 after its loss, but the Badgers still can compete for a Big Ten Conference title if they bounce back.

They just need to avoid repeating the mistakes that caused them to lose a contest in which they controlled possession for over 42 minutes and ran 95 plays from scrimmage, their highest single-game total since at least 1990.

Mertz accepted responsibility after the game and vowed to get better. Coaches and teammates say they like the way he’s responded.

“I think he’s trying to do the right thing and owning the things where he can be better,” Wisconsin coach Paul Chryst said. “I like it. He’s got good energy. He understands his role in the big picture. I’ve spent time with him. It’s hard for everyone, right? But it’s an opportunity – an opportunity to get better. I’m confident he’ll do that.”

Offensive tackle Tyler Beach noted there was plenty of blame to go around for the loss.

“Everybody made mistakes in that game, myself included,” Beach said. “I think Graham’s the kind of guy who keeps his head high. He doesn’t let outside things get to him.”

Ever since Mertz took over as starting quarterback last year, the Badgers have gone 4-4 with their fortunes depending on how well he protects the football.

In the four starts Wisconsin has won, Mertz has thrown a combined eight touchdown passes with no interceptions. That includes his memorable debut, when he went 20 of 21 and threw for five touchdowns in a 45-7 blowout of Illinois.

“I know when I’m playing good ball and we’re all playing together, it’s hard to beat us,” Mertz said. “That gives me confidence. It will never falter, never at all.”

But in Wisconsin’s four losses with Mertz under center, he has produced seven interceptions with only one touchdown pass.

Mertz was at his worst against Penn State whenever Wisconsin got in scoring position. The Badgers failed to score in four series that reached the Nittany Lions' 25-yard line, including three drives in which they got inside the 10.

A botched handoff from Mertz to Chez Mellusi resulted in a fumble when Wisconsin had third-and-6 from the 8 in the second quarter.

Wisconsin trailed 16-10 but had first-and-goal at the 1 late in the fourth quarter until a Mertz fumble pushed the Badgers back to the 7. That drive ended when Jaquan Brisker picked off Mertz’s fourth-and-goal pass to tight end Jake Ferguson and delivered a 41-yard interception return.

The Badgers then got to the Penn State 25 in the closing seconds, but Mertz overthrew an open Chimere Dike near the end zone. The game ended when Mertz’s third-and-17 pass from the 32 was intercepted by Ji’Ayir Brown.

His mistakes against Penn State became particularly glaring to Badgers fans a night later when former Wisconsin quarterback Jack Coan, who transferred after losing his job to Mertz, threw for 366 yards and four touchdowns with one interception in his Notre Dame debut as the ninth-ranked Fighting Irish edged Florida State 41-38 in overtime. Notre Dame faces Wisconsin on Sept. 25 at Chicago’s Soldier Field.

Mertz said he didn’t watch any other college football this weekend because “I’m just focused on what we’ve got here and taking it week by week.” He instead analyzed what went wrong against Penn State and tried to learn from it.

“It’s definitely frustrating to go back and watch it,” Mertz said. “I know that in the end I can only control what I do next, and that’s approaching practice every day like it’s a new opportunity and growing.”