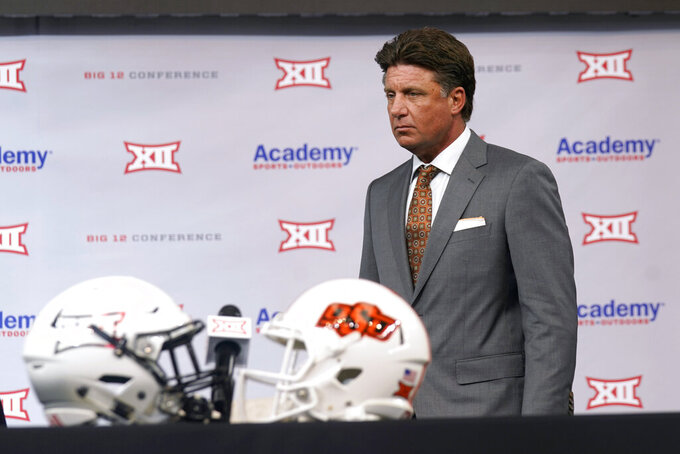 There was the death of his mother, a soft-spoken and easygoing soul who had always told her son to just relax. He also ran into problems last summer with his players who were focusing on racial injustice, and were upset with him being photographed wearing a shirt promoting a far-right news channel. The coach had also criticized mainstream media coverage of the pandemic.

“The one thing with all of the stuff that's gone on over the last 14 or 16 months that's had an effect on me, our culture in our program is pretty much the same,” Gundy said at Big 12 media days. ”I think it's all of us having the ability, and I include myself, to listen and be patient and think things through. Usually I wanted to make a decision now, we move this direction, this is what we do, that's the way it is."

Gundy took a $1 million pay cut and had his contract shortened by a year after an internal review prompted by sharp criticism from former star running back Chuba Hubbard, who is Black. The administration said the contract adjustments were Gundy's idea and that the review found “no sign or indication of racism” in the football program.

“I think what I learned is to really listen to what’s out there and have compassion for patience and sitting down and thinking things through,” Gundy said. “So I think some of the transition that we went through, honestly, as a country over the last year, in my situation, some patience, more of an ability to listen and make really quality decisions and not move so fast.”

Gundy, a former Oklahoma State quarterback, is going into his 17th season as head coach of the Cowboys.

Only two current FBS coaches have been at their schools longer: Iowa's Kirk Ferentz and TCU's Gary Patterson. Ferentz's first season with the Hawkeyes was 1999, and Patterson was promoted from defensive coordinator to head coach of the Horned Frogs after the 2000 regular season before they played in a bowl game.

Patterson is going into only his 10th season in the Big 12, the league TCU moved to from Mountain West. The next most-tenured Big 12 coach is Iowa State's Matt Campbell, going into his seventh season.

Baylor linebacker Terrel Bernard was the Big 12's leading tackler, with 55 tackles through five games, before he suffered a season-ending shoulder injury. Now he's back for another season after deciding not to enter the NFL draft.

“I'm thankful for Terrel coming back. It was a choice that he made. And we’re all better for it. I’m a better coach because of it,” said Dave Aranda, going into his second season as Baylor's coach.

Aranda expects Bernard to be improved this season, with a better understanding of the defense that Aranda initially installed primarily through Zoom and remote learning because of the pandemic that wiped out spring practice just weeks after his hiring.

Bernard said he was cleared two months ago for full activity, and that extra time together with coaches and players has been huge in fully learning the system.

“Taking a step back and seeing the bigger picture, while you’re in the season kind of going through the fire, it’s tough to do that,” he said.

All four Texas Tech wins last season were by single scores, and so were two of its losses in a 4-6 season. That was after the Red Raiders went 0-4 in such games in coach Matt Wells' debut, with those four by a combined 11 points while finishing 4-8 overall.

“I think the name of the game in this league is finding a way to win close games,” Wells said. “But we know that. In order to get into a bowl game and to get to the upper half of the Big 12, you’ll have to win close games.”

Wells hopes leadership and the experience of being in those situations so much in the past two years can make a difference this season.

“You need to win a couple, especially early, to give your guys confidence and momentum as the season lingers on," he said. “Because you’re going to be in those games every Saturday in this league.”