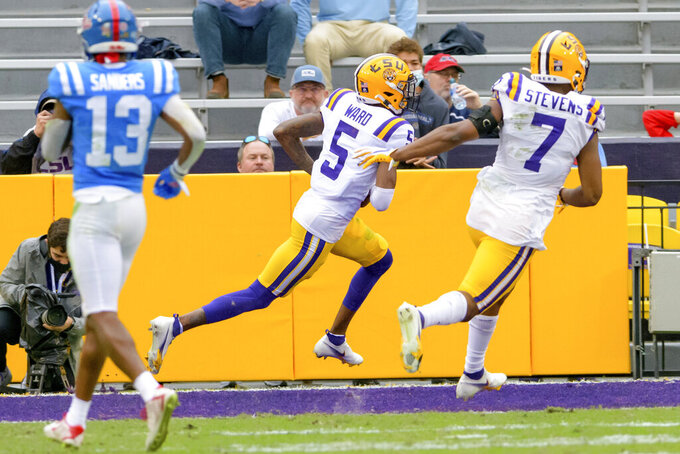 BATON ROUGE, La. (AP) — Good thing for Kayshon Boutte and LSU that the freshman receiver decided his twisted ankle didn't hurt enough to duck out of a chilly rain and into the locker room during the tense final minutes of a clash with rival Mississippi.

Boutte turned an 11-yard crossing route into a zig-zagging, tackle-breaking, go-ahead, 45-yard touchdown with 1:30 left — a play that also gave him the LSU record for yards receiving in a game.

Boutte caught 14 passes for 308 yards and three touchdowns, and the Tigers held on for a 53-48 victory over Ole Miss on Saturday.

“I was hurting before the play," said Boutte, who eclipsed Josh Reed's mark of 293 yards receiving against Alabama in 2001. “You can’t really quit, knowing that you’re getting the most receptions, most catches. It’s like the game is in your hands.”

Ole Miss quarterback Matt Corral drove the Rebels into LSU territory in the final minute, but his sixth turnover of the game on a fumble caused by Ali Gaye ended the threat and the Tigers (5-5) avoided their first losing season since 1999.

His lone interception looked costly, coming in the end zone in the fourth quarter with LSU trailing 41-40. But the Tigers pressed on in miserable weather and a mostly empty stadium for about as memorable a comeback as relatively low-stakes game could provide.

“For sure, 2020’s been hard year for everyone," Johnson said. "We kept fighting, we stuck together. ... I’ll never forget these times.”

Had LSU lost, Ed Orgeron would have had the dubious distinction of coaching the first team to follow a national title with a losing record since Ohio State in 1943 — when World War II caused a level of chaos and uncertainty not seen again in college football until the onset of the coronavirus pandemic during the past year.

“When you fight hard and you work for it, it’s something to behold,” Orgeron said. "At the end, our guys kept on fighting and they gave it all they had.”

Corral was intercepted five times — twice by Jay Ward and once each by Gaye, Todd Harris and Jabril Cox. Ward returned his first interception for a 31-yard TD.

“I was being a little too aggressive, not taking what they give me, throwing the ball blindly to the check-down, not being calm in the pocket, doing things out of the norm," Corral said. "I take that loss across the chin. ... That is on me.”

He passed for 251 yards and three touchdowns, the last on a pin-point, over-the-shoulder throw to Braylon Sanders that put the Rebels (4-5) ahead 41-40 early in the fourth quarter of a game that LSU had led 37-21 in the second half.

Corral also was Ole Miss' rushing leader with 158 yards and he scored on a naked bootleg on fourth-and-goal from the 2 that gave the Rebels a 48-40 lead with 8:43 to go. Sanders finished with four catches for 70 yards and two TDs, while running back Jerrion Ealy returned a kickoff 100 yards for a touchdown.

“Usually, if you turn the ball over six (times) and you’re minus-five (in turnover differential), you’re not even in the discussion about winning, let alone being ahead in the fourth quarter,” Ole Miss coach Lane Kiffin said. “Really a shame because we had ’em.”

Ole Miss: The Rebels demonstrated the explosiveness to score even more points than they did — if not for the turnovers. After what they've done in Kiffin's first year, they look primed to field one of the more exciting offenses in college football next season.

LSU: The Tigers' much-maligned defense wound up putting forth its fourth respectable performance in five games under embattled coordinator Bo Pelini, the exception being a 55-17 loss to Alabama. Kicker Cade York, who kicked a winning 57-yarder in the fog at Florida, kicked four field goals, including a 50 yarder in the rain late in the third quarter. Johnson, son of former NFL QB Brad Johnson, could be a front-runner to start next season after winning his first two starts in dramatic fashion.

“He’s got ice in his veins. His dad was a Super Bowl champion quarterback. He was raised on football. He knows how to react," Orgeron said. "He’s going to be a great quarterback for us.”

LSU: The Tigers are done for the season, having already announced a self-imposed bowl ban this year in an effort to cooperate with an NCAA probe of past recruiting violations.