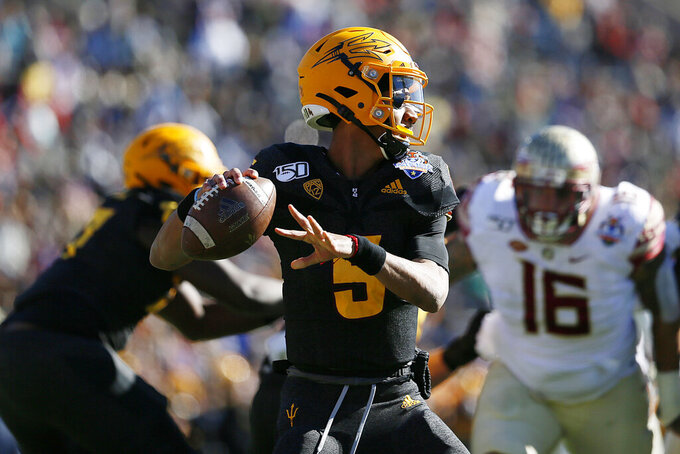 LOS ANGELES (AP) — In any other college football season, a kickoff shortly after 9 a.m. Pacific time in the venerable Los Angeles Memorial Coliseum probably would be a bizarre, contentious event inviting serious discussions about the sanctity of the game and the fan experience being bent to television's desires.

At the start of this particular Pac-12 season, weird is relative.

Breakfast ball comes to downtown Los Angeles on Saturday in the conference's long-delayed season opener pitting No. 20 Southern California against Arizona State. With no fans in the stands and a conference hungry to showcase its skills to a national television audience, this bright-and-early start to game day seems almost appropriately strange.

It can be tough to get a regular college student out of bed with the sunrise, but the Trojans and the Sun Devils both say they welcome this wakeup call.

“When we were in Pop Warner, shoot, we were playing at 9 a.m. all the time,” USC quarterback Kedon Slovis said. “So obviously it’s something we haven’t done in a while, but it’s nothing that we’ve never done. Just getting more sleep and getting yourself used to waking up early, that’s pretty much all you can do.”

Trojans receiver Amon-Ra St. Brown agrees: “I think it’s just another day. I don’t see all the hype around it. I can play anytime once I’m up, so it’s just an earlier game for me. It’s nothing too crazy.”

The TV audience could get a treat in this matchup, which pits the conference's top two returning quarterbacks. Slovis is looking to build on one of the best freshman seasons by a passer in Pac-12 history, while ASU sophomore quarterback Jayden Daniels is held in similarly high regard.

Both teams are cautiously confident that the early start — the earliest in USC's records going back to the early 1950s — won't affect their effort. Arizona State coach Herm Edwards will wake up his players at 4:45 a.m. on game day.

“We’ve always practiced in the morning, but that’s practice,” Edwards said. "We’ve never played a live game. There’s a different feeling when you’re playing a game, right? It’s the first time I’ve ever played a game at 9:00 or 10:00 in the morning. Players as well, so for both teams it will be interesting.

“How does it start with a stadium that’s not going to be full by any stretch of the imagination, as we know?" Edwards added. "Who’s going to bring the energy, and does it take a quarter for both teams to get started? I don’t know, I really don’t know. What's the pace of the game that early in the morning? I wish I could tell you. but I don’t know.”

USC and Arizona State will field defenses that may have undergone major offseason makeovers. USC coach Clay Helton turned over his group to Todd Orlando, the respected former defensive coordinator at Houston and Texas for Tom Herman, while Edwards promoted fellow NFL veteran Marvin Lewis to co-defensive coordinator this season.

Orlando's aggressive, hard-hitting style is well known from his previous collegiate stops, but he plans to add a few tweaks for USC's personnel.

Lewis' plans are much harder for the Trojans to figure out, since the longtime Cincinnati Bengals boss hasn't been a coordinator since 2002. Lewis should run a pro-style 4-3 defense, but there are plenty of unknowns and no game tape to watch.

“He's one of the better coaches in the history of our game defensively,” Helton said of Lewis. “It's hard to say, ‘Hey, they’re going to do this, this and this.'"

After a strong debut, USC offensive coordinator Graham Harrell begins his second season with his version of the Air Raid offense, which typically takes a big jump forward in effectiveness and production when the players running it are in their second year. That's good news for a USC offense loaded with returning starters, including its top six tailbacks and seven of its top eight receivers from 2019.

Slovis, the Phoenix-area native voted the Pac-12's preseason first-team quarterback Thursday, is also positioned for a breakout after gaining 15 pounds of muscle. “I say it all the time, you can’t replace experience,” Harrell said. “That’s where you improve the most.”

Orlando knows the Trojans must be prepared for just about anything from the Sun Devils' offense, even though ASU has no running backs with any Division I carries after Eno Benjamin's departure. He has a big advantage with Daniels, who was voted to the Pac-12's preseason second team behind Slovis.