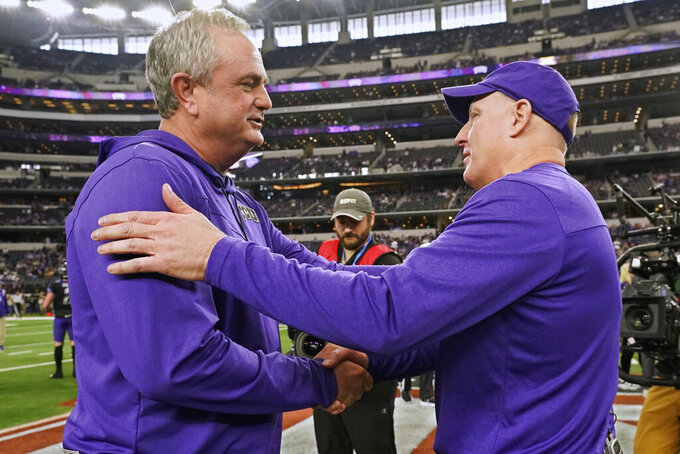 ARLINGTON, Texas (AP) — Big 12 Commissioner Brett Yormark said the conference is already getting younger and more contemporary, just as he had hoped when he took the job during the summer. The football is pretty good, too.

Speaking at the league's championship game Saturday, Yormark talked about what he called probably the league's most exciting football season in years. He said third-ranked TCU had “captured the imagination of fans all over the country," while attendance and ratings were up league-wide with eight of the 10 teams being bowl eligible.

Yormark said the league's new media rights deal is “validation of where this conference is going. ESPN and Fox are betting yes on the Big 12.”

Without getting into specifics, he said the league and the networks were in the formal final stages to complete an extension. Two years are left on the current deal, after which Oklahoma and Texas will move to the Southeastern Conference.

The extension with ESPN and Fox has been widely reported to be for six years and worth more than $2 billion.

The Big 12 will initially grow to 14 schools after BYU, Central Florida, Cincinnati and Houston officially join the league next summer. The league will not go to divisions, and Yormark said he expected the 2023 football schedule to be released by mid-December.

ESPN had its “College GameDay” show on site Saturday at AT&T Stadium, the home of the Dallas Cowboys. Yormark said it will be the long-term site of the Big 12 title game. Grammy Award-winning Ashanti performed the national anthem and the field included camouflage logos from streetwear fashion brand A Bathing Ape (BAPE).

“I think we’ve been very direct about our initiative of where we’re going, where we want to take the brand, and I think (people are) going to embrace it, candidly,” Yormark said. “And this is just a first step. Today’s game, which you’ll see, in the spring around basketball, we’re seeding change. But it can’t happen overnight and it’s got to evolve.”

Yormark came to the Big 12 from Jay-Z's Roc Nation, where he had been since 2019, and was the CEO of the NBA's Brooklyn Nets before that.

He had never had a job in college athletics before being named the leader of the Power Five conference, but pledged to the Big 12 board of directors that he would ensure the league would grow its brand and business by being bold and humble, aggressive and thoughtful, and innovative and creative.

“This week, 120 days in the job, loving it, more energized now than ever before just because I see the possibilities and the opportunities in front of us,” Yormark said. “We’re seeding a lot of change, and then look forward to something pretty dramatic come July when we bring the four new schools in and we truly relaunch the Big 12, the new Big 12.”