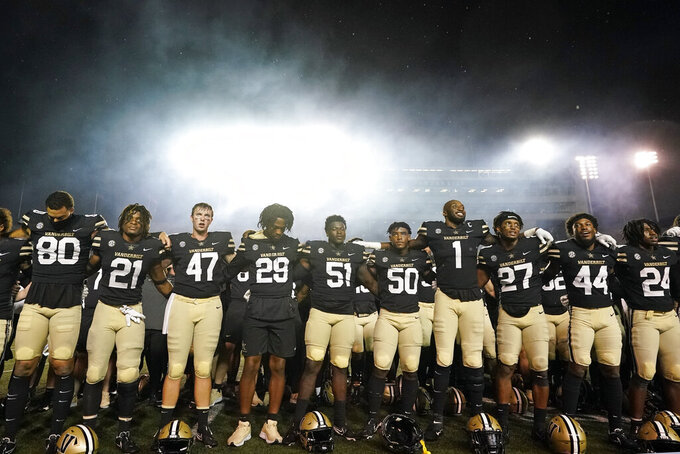 NASHVILLE, Tenn. (AP) — It was predicted by many to be an ugly game and it lived up to its billing.

In a meeting between two of the worst teams in college football Vanderbilt rallied for a 30-28 victory over Connecticut Saturday night.

"I will take an ugly win any day knowing we have a long way to go,” first-year Vanderbilt coach Clark Lea said.

“What we needed was for (quarterback Kenny Seals) to step up and play with confidence,” Lea said. “Going out on that drive he has a look in his eye. He was determined to get it done. He stepped up in a big moment with his offensive teammates.”

Vanderbilt drove 47 yards on seven plays with 1:07 left including converting on 4th-and-4 to set up a 31-yard field goal by Joseph Bulovas as time ran out.

It was the second time Vanderbilt overcame a Connecticut lead. Connecticut opened with field goals of 38 and 44 yards by Joe McFadden on the first two drives for a 6-0 lead. A pair of touchdowns in the final 5:21 gave Connecticut a 28-27 lead.

Connecticut quarterback Steve Krajewski threw a touchdown pass and rushed for another in the final 5:21 to give the Huskies a 28-27 lead. He threw for 264 yards hitting 18 of 34 attempts with two interceptions. He had no trouble finding a way to describe his feelings.

“It stinks,” Krajewski said. “We have to wake up in the morning and go to work.”

Vanderbilt wide receiver Will Sheppard caught touchdown passes with one each in the second quarter and fourth quarter. They were his first two career touchdown receptions as he had seven catches for 113 yards.

Seals had an impressive performance, throwing for 333 yards. Chris Pierce finished with 103 yards as Seals completed 27 of 40 attempts with one interception.

“I was proud of the way Kenny threw it and the receivers caught it,” Lea said. “There were some good play designs. There is a lot to build on there.

Running back Rocko Griffin Jr.’s first career rushing touchdown came on a 1-yard run with four minutes left in the second quarter to give Vanderbilt a 17-16 edge at the half.

Neither team scored in the third quarter.

UConn: Penalties were a major problem for the Huskies with 12 for 93 yards, including a personal foul in the first half that resulted in the ejection of a player.

Vanderbilt: In the second quarter safety Max Worship intercepted a pass only to fumble the ball back to Connecticut as he tried to run it back. It was Worship’s first career interception and gave the Commodores interceptions in back-to-back games for the first time since 2019 against Purdue and LSU.

Lea said he saw a lot of long faces on his defensive players who allowed 331 yards passing and 192 yards rushing.

“This defense has stepped up in big moments a number of times this season,” Lea said. “Our pass rush continues to be an issue.”

Connecticut is on the road at Massachusetts on Saturday.

Vanderbilt begins a series of seven straight SEC games with a trip to Florida.