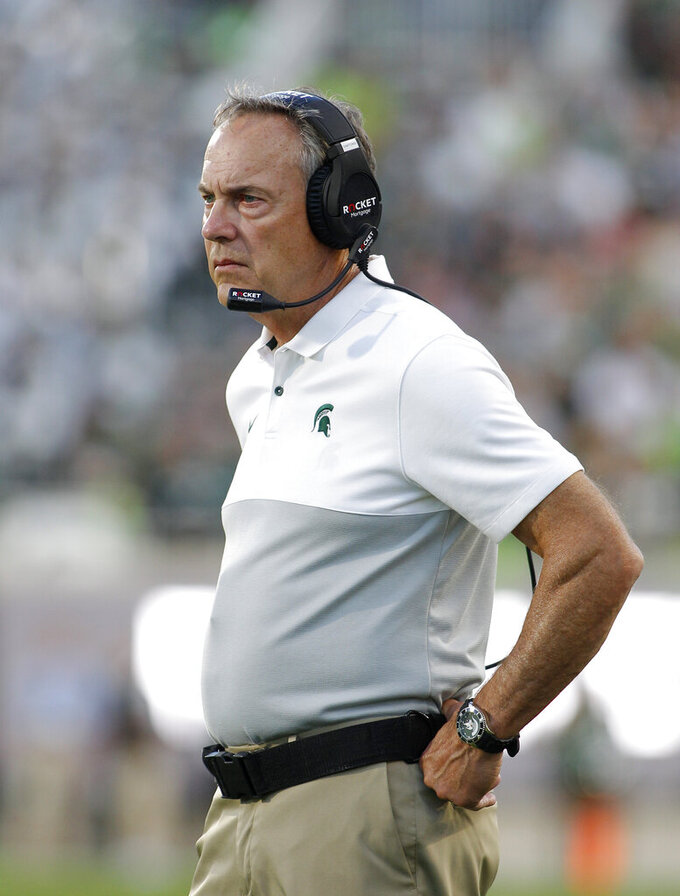 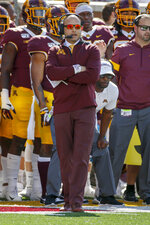 EAST LANSING, Mich. (AP) — Mark Dantonio will have to wait a bit for his next milestone after the last couple minutes went terribly wrong for Michigan State.

James Franklin and Kirk Ferentz were a bit more fortunate, but they had reason to sweat while Penn State and Iowa were pushed to the limit by in-state rivals.

On a wild Saturday in the Big Ten, a half-dozen games came down to the last few plays. Penn State, Iowa and Minnesota managed to pull through, while Michigan State, Illinois and Maryland fell short. It was a day that certainly drove home the notion that there's a fine line between winning and losing.

"The outcome of the football game had a lot of things going on, some things we could control and some things we can't control," Dantonio said after his Spartans lost 10-7 to Arizona State. "Too many missed opportunities."

Dantonio is tied with Duffy Daugherty for the most victories by a Michigan State coach. He was on the verge of standing alone with that record when the Spartans led 7-3 late in the game, but Michigan State's defense finally cracked, allowing Arizona State quarterback Jayden Daniels to run for a first down on fourth-and-13. The winning touchdown came soon after that, with just under a minute remaining.

The Spartans drove back into field goal range, but after spiking the ball to stop the clock with 11 seconds left, they appeared indecisive. The field goal team had to rush out, and although Matt Coghlin made a kick that appeared to tie it, Michigan State had too many men on the field. The re-kick missed.

Illinois' matchup with Eastern Michigan also came down to a kick, and it had to be a helpless feeling for the Illini after EMU drove into position for a 24-yard field goal at the end. Chad Ryland made it to hand Illinois a 34-31 loss.

Maryland also lost after an encouraging victory over Syracuse in its previous game. The Terrapins fell 20-17 to Temple after their offense failed to reach the end zone on a couple great opportunities late. Down 20-15, Maryland took over at the Temple 4-yard line after a long punt return. Four straight runs failed to reach the end zone, and the Terps turned the ball over on downs.

A shanked punt gave Maryland the ball back at the Temple 10, but the Terrapins couldn't score then either.

Maryland dropped out of the Top 25 on Sunday, and so did Michigan State.

Iowa could have faced a similar fate, but Ferentz's Hawkeyes held off Iowa State 18-17. Iowa sealed that game by recovering a punt that bounced off an Iowa State player.

Penn State had a close call as well in a 17-10 win over Pittsburgh. It wasn't Franklin who faced the big coaching decision in this one — but rather his counterpart, Pitt's Pat Narduzzi.

Down by seven, the Panthers had first-and-goal from the 1 in the fourth quarter, but after two incompletions and a failed run, they attempted a field goal — and missed with 4:54 remaining.

Pittsburgh got the ball again but never made it back to the red zone.

If there's one team that's used to that type of tense finish, it's Minnesota. The Gophers beat South Dakota State by seven and Fresno State in two overtimes. Then they edged Georgia Southern on Saturday 35-32, scoring the winning touchdown with 13 seconds left.

It's probably not a great sign for Minnesota that these games have been so close, but the Gophers are still undefeated. That's more than some of their Big Ten rivals can say.

"You've got to get up and get off the ground — that's part of it," Dantonio said. "We've all had difficult days or things that didn't work out for us and the next thing you know you're sort of trying to climb out of a hole a little bit. That's the nature of life and that's what we do."