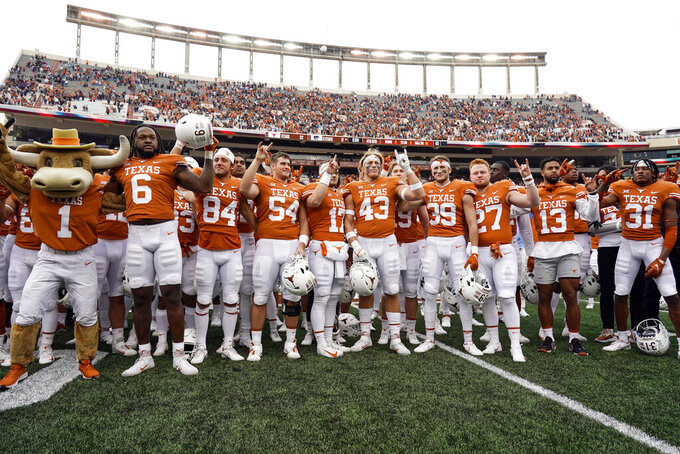 FILE - Texas players sing "The Eyes Of Texas," after defeating Kansas State 22-17 in an NCAA college football game in Austin, Texas, on Nov. 26, 2021. The new business world of college athletes getting paid for endorsements has created a rapidly expanding pop-up industry: nonprofits formed to set up athletes with deals that pay them to promote charities. Among the first was Horns With Heart, a nonprofit set up to aid offensive linemen at the University of Texas in 2021. A bill filed Wednesday, Sept. 28, 2022, would eliminate the tax deduction for individuals and for specific contributions that are then paid to athletes for name, image and likeness deals. (AP Photo/Chuck Burton, File)

The collectives are pitched as feel-good partnerships, but they also raise questions. Is their mission to support charities and their communities or do they exist primarily to funnel money to athletes — in some cases tens of thousands of dollars — and give a school's donors a tasty tax break?

“That’s the ultimate question,” said Brian Mittendorf, an Ohio State accounting professor with a focus on nonprofits. His school is one of dozens across the country with affiliated nonprofit collectives setting up athletes with deals to work with charities.

There's enough skepticism that a bipartisan effort in Congress has been started to try to limit the tax deductions that would be available to those bankrolling nonprofit NIL collectives. A bill filed this week by Sens. John Thune, a South Dakota Republican, and Ben Cardin, a Maryland Democrat, would eliminate the tax deduction for individuals and for specific contributions that are then paid to athletes for name, image and likeness deals.

“We also have an obligation to protect taxpayer funds, which means that charitable deductions should be reserved for charitable activities," Cardin said. "Purposefully blurring the line between private expenses and charitable contributions dilutes both these efforts.”

The new entities often exist right next to for-profit collectives that pool money to align athletes with business deals and offer contributor perks such as VIP-level access to athletes.

The number of nonprofits supporting athletes appears to growing, with at least two dozen in place and more launching on an almost weekly basis. They were born out of the massive change that hit college sports in 2021 when athletes were allowed to earn money in ways that had been prohibited for decades.

Among the first was Horns With Heart, a nonprofit set up for offensive linemen at the University of Texas. It launched in December 2021 just before the national signing day for football recruits as coach Steve Sarkisian was trying to land a highly-rated recruiting class.

Horns With Heart caused an immediate uproar with a promise of $50,000 per year for each scholarship offensive lineman. Critics said it pushed the boundaries of the NCAA's ban on "play for pay” deals, but it was just the start. By April, Texas rival Oklahoma had the 1Oklahoma nonprofit promising Sooners football players up to $50,000 a year for work supporting charities.

Horns With Heart founder Rob Blair said there’s no gray area about the mission at his organization: Help players cash in and help charities tap into local star power to raise their profile.

“Our intention throughout,” Blair said, “was to accomplish both tasks.”

Horns With Heart now has every Longhorns offensive lineman signed to their first $50,000, Blair said. The work they’re expected to do for charities can include social media promotions, in-person appearances at events and public service announcements.

The group has announced partnerships with a children’s hospital, a support group for active military and veterans, football camps and a foundation run by former Longhorns and NFL linebacker Derrick Johnson to remodel and update school libraries.

“In life, everyone is searching for win-win scenarios,” Blair said. “We want to show the world that NIL can be utilized to make a true positive impact for everyone.”

Blake Lawrence, chief executive of Opendorse, a company that partners with dozens of schools to help initiate, track and monitor NIL deals, noted that boosters are used to getting tax dedications for their donations to athletic department foundations. Many, he said, have made it clear they won't be switching that money to NIL collectives without a similar return on investment.

“It’s not the only reason why, but the main reason why is that the biggest contributors to collectives are asking for their contributions to be tax deductible," he said. “And that is only possible if the collective has 501(c)(3) status.”

Mit Winter, a sports law attorney in Kansas City, Missouri, who has been tracking issues in the college athlete market place, agreed. He said the nonprofits may be able to lure the savvy, larger donors who want something even more valuable: the tax deduction Sens. Thune and Cardin are trying to eliminate.

Thilo Kunkel, director of the Sport Industry Research Center at Temple, questioned how the nonprofits can place a dollar value on an athlete's efforts on behalf of a charity that could range from something as simple as a tweet to a visit with sick children to delivering meals to the elderly.

He also noted that in some instances, a star athlete just showing up to an event has an impact that cannot be measured, certainly not by dollars or cents. A win-win? It's possible, Kunkel said.

“So we’re now saying, ‘Yes, we’ll give you $5,000. But you need to show up at this training camp for kids to then do a motivational speech' that’s disguised as a charitable act," Kunkel said. “So they’ll run a camp for inner-city kids, but it’s basically just a way for them to pay the to pay the kids who are running the camp. I guess the kids, the inner-city kids still benefit. They still benefit. So the inner city kids still get the access to the athlete. And they still get the motivation."

At Kansas, a group of Jayhawks basketball players was paid to attend a fundraising event for a group that combats homelessness. The players ended up contributing $17,000 of their own money.

“I think people were surprised," player Jalen Wilson, who donated $5,000 that night, told the Lawrence Journal-World. “I just felt the need to do it and if I have it or I can help I’m going to do it every time.”

Whether these nonprofits are simply payment avenues to athletes could be spelled out in the documents they will have to file with the federal government in the months and years to come. Those are public record and charity watchdog groups also pay attention.

Eventually, the marketplace will determine the nonprofits' future if donors decide their money could be better used elsewhere, Lawrence said. For now, donors can feel like they are helping their favorite teams and charities do their work as the same time.