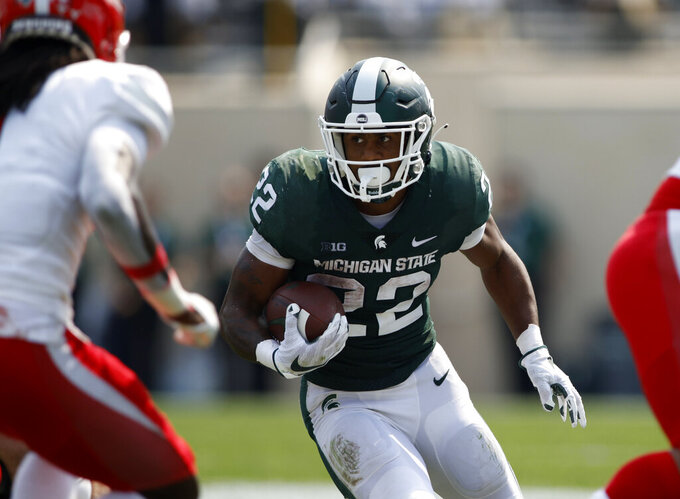 This week it is the Big Ten that gets an opportunity to make a statement.

The Pac-12 was in the spotlight last week, and while the conference as a whole didn't fare well going 3-5 in nonconference games against FBS opponents, Oregon's upset at Ohio State was a potential season-shaper.

The Big Ten has five teams facing ranked nonconference opponents on Saturday. According to the Big Ten network, that hasn't happened since October 4, 1975.

The main event is Saturday night in Happy Valley with No. 22 Auburn at No. 10 Penn State, a rare SEC-Big Ten regular-season game matching ranked teams in a home stadium. The last was No. 3 Alabama's 27-11 victory at No. 23 Penn State in 2011.

The only other time a ranked SEC team has played at a Big Ten school was Georgia at Michigan in 1965. The Bulldogs won 15-7.

Elsewhere Saturday, four games have unranked Big Ten teams facing ranked nonconference foes. The Big Ten is an underdog in each and the road team in three of them, so keep expectations modest.

Especially for Nebraska, which is a three-touchdown underdog against Oklahoma in a meeting that celebrates the 50th anniversary of the 1971 Game of the Century between the Cornhuskers and Sooners. Nostalgia might be the only appeal of this matchup of former Big Eight/12 rivals.

Purdue (at No. 12 Notre Dame) and Michigan State (at No. 24 Miami) are both single-digit road underdogs and Indiana is underdog at home against No. 8 Cincinnati.

Nether is ranked, but Minnesota at Colorado is another Power Five vs. Power Five there for the taking for the Big Ten.

The Big Ten's best, Ohio State, took a hit last week, but the rest of the league can pick up the slack on Saturday.

The picks with lines from FanDuel Sportsbook:

The last Gators QB to beat the Tide was Tim Tebow; 'Bama has won seven straight meetings, the last three in the SEC championship game ... ALABAMA 42-28.

Bulldogs might get QB JT Daniels back, but figure they'll play it safe against an SEC rival that barely squeaked by East Carolina last week ... GEORGIA 35-10.

Tigers have a 29-game home winning streak and seven straight wins against the Yellow Jackets ... CLEMSON 45-10.

Bearcats QB Desmond Ridder is averaging 11.4 yards per attempt but the Hoosiers will be a huge step up in competition from his first two games ... CINCINNATI 27-20.

Tigers don't get to these parts much; Auburn's only previous regular-season road game against a Big Ten team was 1931 at Wisconsin ... PENN STATE 24-20.

Irish have won seven straight and nine of 10 against the Boilermakers, but they haven't played since 2014 ... NOTRE DAME 28-22.

Bruins are looking to go unbeaten in nonconference games for the first time since 2015 ... UCLA 34-21.

Been kind of a disappointing start to the season for the Cyclones; nothing like a trip to Vegas to forget your troubles ... IOWA STATE 35-10.

Bulls probably would have preferred hosting the Chants from Myrtle Beach in late October ... COASTAL CAROLINA 31-24.

Get to know Cavaliers QB Brennan Armstrong, who has thrown for 744 yards and seven touchdowns in two games ... NORTH CAROLINA 38-31.

Last time the Knights and Cardinals played was 2013, the one season both were members of the American Athletic Conference and UCF’s upset help send it to the BCS ... UCF 34-30.

Second straight week with a nonconference Power Five game for the Buffs ... MINNESOTA 21-19.

Cowboys are second-to-last in the Big 12 in yards per play; not what you'd expect from a Mike Gundy team ... BOISE STATE 27-24.